He is one of the globe’s biggest sporting stars, with a raft of titles and a legion of adoring fans – but true love is proving tougher to conquer for Anthony Joshua. 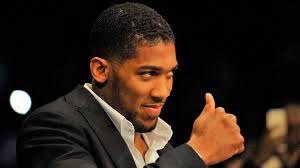 The world heavyweight boxing champion today opens up to The Sun about life in lockdown with his family — including becoming “super dad” to his four-year-old son, JJ.

In a world exclusive interview, the 30-year-old fighter also discusses his determination to knock out boxing rival Tyson Fury, his flirtatious quip to The Queen and how sport can help reunite Britain after the Covid-19 crisis.

However, despite all of his accolades, Anthony admits there is one prize which remains as elusive as ever – finding love.

AJ says: “I think you can date and still be a successful sportsman but it’s hard to find a balance and I would have to compromise — which I’ve not felt able to do.

“My dad never gave me advice about much. But in terms of relationships what I have learnt and what I tell my son is, it would be nice to find a high school sweetheart and to grow together because as you get older you get set in your ways.

“For me to have a relationship now means I would have to compromise and change my ways and I don’t know how easy that would be for me to do.

“So I do date but I don’t get to the stage where I actually put anyone into that position.

“I don’t have a girlfriend and I haven’t had one for a while. But as I get older I do think it would be nice to have someone, someone to grow with as well — but I honestly haven’t found anyone.”

Any future girlfriend would have to understand what it’s like to be famous, he believes.

He explains: “Maybe I need to get off the estate and start going to celebrity parties — maybe do something different.

“I hope I will — and probably meeting someone else who understands fame would make sense. I would hope so. But it needs to be someone down to earth, family-orientated – someone who can call my mum their second mum.

“It takes time to grow that and, as I said, now I am older I am stuck in my ways. As I get older it would be nice to bring someone into my world but it’s dependent on who and I just haven’t found someone yet.

“Maybe we can go on a hunt. We have all the time now.”

With boxing currently on hold, Anthony has spent months at home enjoying time with his family at their Watford home.

But after initially embracing home-schooling his son, he admits he has struggled to keep up his efforts as the lockdown continues.

He told how the youngster’s attention has gradually drifted away from his dad’s tuition and towards his favourite cartoons instead.

AJ says: “I started off as super-dad and then that slowly went out the window and to be honest he’s watching way too much TV now.

“The only thing he wants to do is watch Paw Patrol and Ryan’s World – there’s no way you’d get him watching Joe Wicks.”

AJ’s success in the ring means little to JJ and his modest dad is perfectly happy with that.

He says: “At home he doesn’t really think of me as a famous boxer or anything like that. I’m not a superstar and he doesn’t think so either. He knows I fight but that’s all.

read also:Joshua to fight Pulev in September with just 4,000 fans

“I always keep that stuff away from home. I’m not like that at home – and I’m not even like that when I go out, really.”

Soon AJ’s home-schooling will come to an end, although he does not know when yet. The heavyweight says: “The next conversation is about him going back to school — although I’m not too sure if we’ll send my boy back to school just yet.”

Sport is gradually preparing to return, with top-flight football resuming next month — and AJ believes it can help Britain get back on its feet.

He says: “Things are heading in the right direction and as long as it’s safe I think sport could play a big part in helping Britain come out of this — it’s 100 per cent going to help lift people.

“It’s great news about the Premier League and boxing will hopefully follow at some point.

“Once it comes back there will be an uplift of energy in households. It is passed down through families. It is good for communities.”

The whole of Britain wants to see him fight British rival Tyson Fury. AJ wants it, too, saying: “In my own mind I had mentally written off most of this year but, if I was to fight this year, it would probably be November or December.

“It’s difficult at the moment knowing how you cover the costs, and whether you could charge people in the circumstances for pay per view.”

AJ has been determined to stay in shape despite being forced to train alone without his team around him.

He has his own key to his local gym and he says the unusual silence there has actually helped him.

AJ explains: “It’s my lifestyle. That’s what I’ve done all my life – instead of going to college, I went to the school of boxing. I learnt how to fight.

“I just hit the bags, skip and it’s the first time in my whole boxing career where I’ve been left alone.

“Normally I’ve got someone in my ear, telling me what to do, how to do it and I’ve actually really enjoyed being on my own. It’s been a blessing.

“And there’s nobody to spar with so you don’t get hit — that’s not always a bad thing!”

He went on: “My workout regime is always boxing and it’s one of the things I love most about boxing. Out of all sports, you really don’t need much to get started.

“It’s just a pair of shorts, some trainers, and you can just start shadow boxing straight away.

“Watch some Mike Tyson and you can just pick up some things — that’s what I used to do. I’d watch Mike Tyson a lot and try his moves in the garden.

“Go to the park, shadow box, go running, listen to a bit of Rocky music, get into your mind that you’re a boxer and then you’re good to go.”

He also told how changes in his domestic routine have proved to be highly beneficial.

AJ says: “I never sit in the living room — and for the first time ever I have done. I was sitting outside earlier and I would never normally do that either. I would usually be at the gym, sauna, swimming.

“Of course, Covid has been a global pandemic and awful but for a lot of people, it has helped people find out about themselves and what they want to do.

“They have worked on themselves and spent time with their family. And that has been very positive for me.”