Gunners boss Mikel Arteta outwitted City manager Pep Guardiola with an astute counter-attacking scheme and Aubameyang struck in each half as Arsenal executed the plan to perfection.

Arsenal will face Chelsea or Manchester United, who meet in the other semi-final on Sunday, in the final at Wembley on August 1.

Arteta captained Arsenal to FA Cup triumph six years ago and, in his first season in charge of the north London club, the Spaniard has led them back to the final of a competition they last won in 2017.

Just days after beating Premier League champions Liverpool, Arsenal offered further evidence that Arteta could be the man to restore them to the glory days of the Arsene Wenger era.

Arteta had fired a warning shot to Arsenal’s board in midweek when he admitted he was concerned about his club’s ability to spend enough to turn them into title contenders.

On the evidence of the canny way he got one over on Guardiola, Arsenal owner Stan Kroenke would be wise to give the man he hired in December a chance to show what he can do with a rebuilt team.

Arsenal had lost their previous seven meetings with City, including a 3-0 drubbing in their first game after the coronavirus hiatus.

City were unbeaten in their past nine matches at Wembley but, thanks to Arteta’s masterstroke, Arsenal handed Guardiola’s side a first defeat there since the 2017 FA Cup semi-final against the Gunners.

With second place in the Premier League secured, City have to focus on the resumption of their Champions League challenge in August, when they defend a 2-1 first leg lead against Real Madrid in the last 16.

City bossed the early exchanges to such an extent that they had amassed 83 percent possession after 10 minutes.

But Arteta knows City well after his time as Guardiola’s assistant and he set out to exploit their weakness against counter attacks, using Aubameyang and Nicolas Pepe to get behind City’s attacking full-backs Kyle Walker and Benjamin Mendy.

Arsenal should have been ahead when David Luiz picked out Aubameyang, who wastefully shot straight at Ederson with only the keeper to beat.

It was a warning City failed to heed and Aubameyang made them pay in the 19th minute.

At the climax of an 18-pass move, Pepe’s deep cross caught Walker dozing and Aubameyang eluded him to slide a fine finish off the far post from a tight angle.

It was the kind of incisive, imaginative attack that City usually torment Arsenal with, but for once it was the men in red celebrating.

The Gabon striker’s 24th goal of the season was a reminder why Arsenal are so desperate to get him to sign a contract extension.

Urging Arsenal to “get the ball, get the ball” at every opportunity, Arteta’s intensity on the touchline was matched by his players.

City, unbeaten in their previous 22 domestic cup ties, were well short of their best.

Defending deep, Arsenal were putting their bodies in the way of everything to keep City at bay. 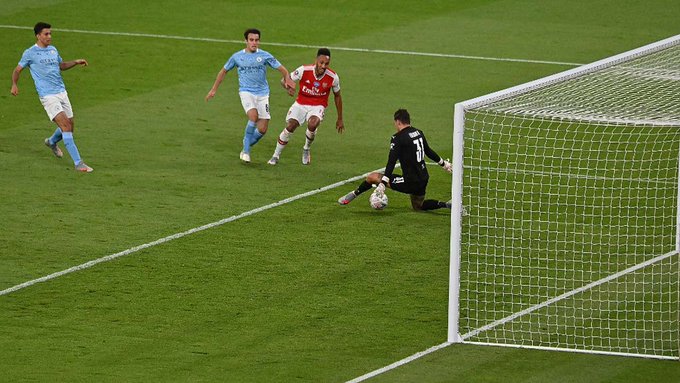 Read Also: Beckham reveals who is better out of Ronaldo, Messi

Even Luiz, much maligned for a terrible display in Arsenal’s last meeting with City, was at the top of his game and Arteta’s rope-a-dope plan brought a rich reward in the 71st minute.

City left themselves open at the back and Aubameyang beat the offside trap as he accelerated onto Kieran Tierney’s sublime pass before slotting under Ederson.

‘We deserve to win a trophy’: Luiz redemption as Arsenal shock Man City