Benzema: I have more responsibility 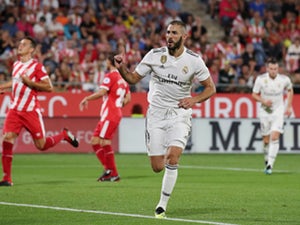 Benzema has scored 197 goals for Los Blancos since his arrival from Lyon in the summer of 2009.

The centre-forward only managed five La Liga goals for the club last term, however, as he played more of a team role supporting Cristiano Ronaldo in the final third of the field.

Ronaldo has since moved on to Juventus, and Benzema has managed five goals in five games in all competitions this term.

The 30-year-old has said that this season ‘he has to show many things that were not as prominent before’ as he looks to beat his best scoring campaign for Madrid, which brought 32 goals.

“Every game I set myself the target of scoring goals, providing assists and helping the team to win,” Benzema told Codere. “I have more responsibility every year, this year I’m the third captain and I have to show many things that maybe were not as prominent before.

“I am very happy to be the seventh highest scorer in the history of the club, it gives me confidence and desire to do more for this club. I still remember when I arrived, I am left with that moment because it was my first time in the team of my dreams, how could you ever forget that.

“Talent is very important but more-so it is important to work hard, you can do many things with talent but you have to work hard to be at the highest level.”

Benzema will be in the Madrid team that takes on Roma in the Champions League on Wednesday night.