Anew norm was seen in goal celebrations as the Bundesliga returned on Saturday. 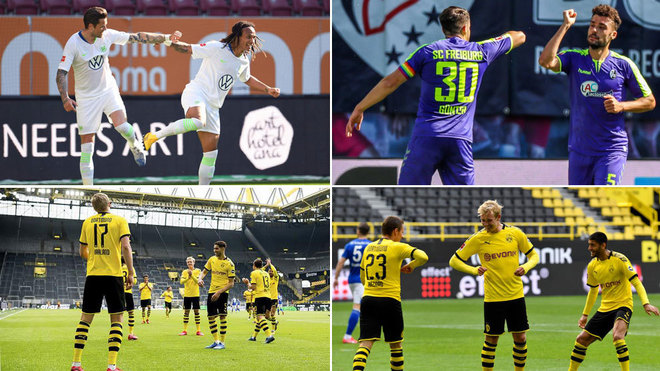 Group celebrations involving hugs and handshakes between players are not allowed under the safety protocol, so players had to improvise.

Freiburg’s Manuel Gulde and Christian Gunter went with the simple elbow bump during their 1-1 draw against RB Leipzig.

Others were more innovative, like Wolfsburg’s Daniel Ginczek and Kevin Mbabu as they celebrated the former’s late winner against Augsburg by kicking their boots together.

Borussia Dortmund’s celebrations probably caught the eye more than any others.

Erling Haaland and co. brought out a socially distant dance for the Norwegian’s opener in their 4-0 win over Schalke.

Read Also: Falcao: Why can’t players hug each other in Bundesliga?

However, not all teams stuck to the rules, with Hertha Berlin players embracing during their 3-0 win over Hoffenheim.

Majority of Premier League players not ready to return – Willian