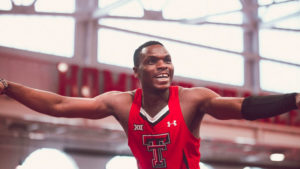 The Texas Tech 2019 track and field team became the first men’s athletic team to win a national championship for the school as they topped the competition in Austin, Texas.
Divine Oduduru, a two-time NCAA Champion winning the 2018 outdoor and 2019 Championship swept the men’s sprints events with a collegiate best time of 9.86s to win the 100m National Championship and getting 10 big points for Texas Tech.
The eight-time Big 12 Champion then broke the NCAA Championship 200M record  with a time of 19.73s.
Oduduru joined senior Andrew Hudson, junior Keion Sutton and freshman Jacolby Shelton in the 4x100m relay. The quartet broke the school’s record on the first day of the NCAA Championship meet to qualify for the championship race and broke the school record for the second time with a 38.45s to come third.
Oduduru said: “My coach told me don’t be scared. Just go and execute. Go and do what you have been doing all year.