EFL chairman Rick Parry has been caught on camera discussing allegations that Wigan’s administration is linked with a Far East betting coup. 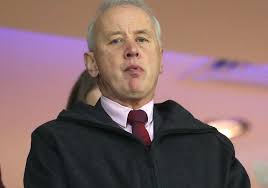 Parry was caught on camera outside his house in Chester by a Latics supporter discussing the shock collapse of the club.

And Parry can be heard saying: “There’s rumours that there’s a bet on them in the Philliipines on them being relegated. The previous owner has got gambling interests on the Philipines.”

A month ago, Wigan were sold from one Hong Kong-based company to another, both of which were majority-owned by professional poker player, Stanley Choi.

He has since been replaced by Chinese businessman Yeung Wai Kay but the club have now been put into administration because the owners are now refusing to invest any more money.

There will now be questions about Parry’s remarks at a time when Wigan, who are 14th in the table and ten points above bottom side Luton, face a 12-point penalty that could relegate them.

A red-faced EFL official confirmed last night: “The EFL is aware of a video of its chairman posted on social media this evening that discusses recent developments at Wigan Athletic.

“It was part of a much wider and impromptu discussion he was having with a Wigan supporter he does not know but who lives in the same area.

“The private conversation focused around the events of the last 24-48 hours, how the EFL can assist and what happens next.

“The various rumours and reports that have been circulating throughout today were also discussed.

“Whilst the chairman was unaware he was being filmed he was happy to engage in the debate and appreciates this is a concerning and challenging time for all those associated with the club.”

Wigan are already scrambling to find the cash to finish the season — with the players and staff heading for massive pay cuts.

Saka to battle, Pepe, Xhaka For Arsenal Player Of The Month