By Our Reporter Last updated Sep 12, 2021 0
Mohamed Salah became the fifth-fastest player to reach 100 Premier League goals as Liverpool won 3-0 at 10-man Leeds United in a match marred by a serious injury to teenager Harvey Elliott.
Salah capped a dominant first-half display from Jurgen Klopp’s men when he coolly converted Trent Alexander-Arnold’s low cross on 20 minutes.
Leeds went close early on through Rodrigo but were fortunate not to be further behind at the interval as Sadio Mane, Elliott and Virgil van Dijk all failed to make the most of big opportunities.
Fabinho doubled Liverpool’s lead when he scrambled in a right-wing corner on 50 minutes before the game turned sour on the hour.
Substitute Pascal Struijk launched into a strong tackle on Elliott leaving the 18-year-old in anguished pain on the floor. The reaction of both sets of players and Klopp and Co on the bench suggested it was a serious injury and the game was halted for the youngster to receive treatment.
Struijk was shown a straight red card as Elliott was stretchered off the field and there was a subdued conclusion to the game with the visitors continuing to waste chances before Mane finally scored in injury time. 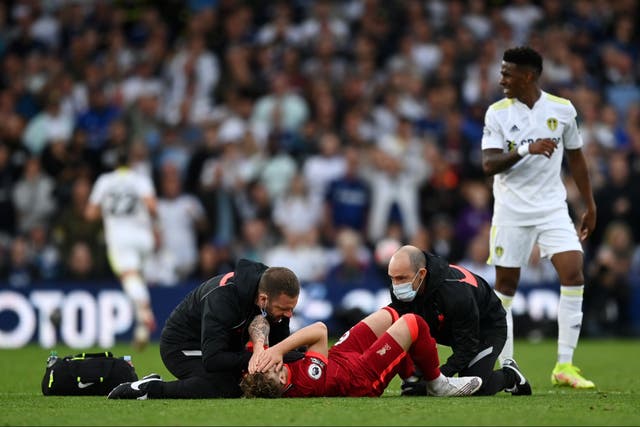 Read Also: UCL: Bayern wait on injured Gnabry ahead of Barca clash
The result sees Liverpool climb to third spot, behind Manchester United and Chelsea on goal difference. The Reds have won eight of their last nine away matches in the Premier League and are 14 games unbeaten.
Leeds, who brought on Dan James for a late debut, stay down in 17th place after failing to win any of their first four top-flight matches in a season for the first time since 1958-59.
Liverpool will now turn their attention to Wednesday’s Champions League Group B clash with AC Milan before hosting Crystal Palace in the league on Saturday. Leeds travel to Newcastle on Friday night.
Loading...