Visacki came through a Monday qualifier to get into the Valspar Championship at the end of April, his first start on the PGA Tour, and the video of his tearful phone call to tell his father the news went viral on social media.

Although he missed the cut at Innisbrook, Visacki then received a personal phone call from Charles Schwab to offer him a sponsor’s exemption into his tournament last week.

Thomas joined Visacki for a practice round at Colonial and, after the latter had missed the cut, approached him to discreetly hand over a cheque and a good . 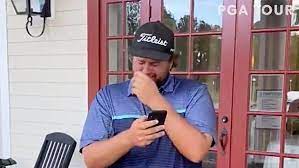 Mike Visacki makes an emotional call to his father

Speaking ahead of this week’s Memorial Tournament, Thomas said: “I was a little irritated that it got out. I didn’t really want it to.

“I saw the video of Mike calling his dad and in a day and age where it seems like only anything in the media is negative and not good these days, I just felt it was so refreshing and great to see and how genuine his excitement and emotions were.

“I just thought it was awesome because he’s been playing the mini tours and been successful on the mini tours for a long time and people now knew who he was because of his story.

Mike Visacki’s dreams came to fruition when he earned his first PGA Tour start back in April.

The Visacki family has made so many sacrifices to support Mike’s journey.

He finally got to call his dad and tell him the hard work had paid off.

“I just wanted to help in a little way and what I’m most happy about is the recognition he has got and I heard that someone on the board of Charles Schwab heard about what I did and then wanted to sponsor him and take care of him and his expenses and everything throughout the rest of the year.”

Thomas said the amount of money he gave to Visacki was “not anything crazy”, but the 2017 US PGA Championship winner is also willing to be generous with his time and advice.

“He lives in Florida and we were going to play some golf together, but I just was like, hey, dude, if you ever want advice, if you ever want to pick my brain, you ever just want to talk, like, I’m here for you. I’m happy to help,” Thomas added.

NFF: There is urgent need to tackle the menace of misinformation