Klopp scrambles for answers as Liverpool’s season figure out

By Our Reporter Last updated Feb 8, 2021 0
Liverpool’s Premier League title defence is in tatters after a 4-1 humbling at home by Manchester City, with Jurgen Klopp facing an uphill task to stop the champions’ season imploding.

The bedraggled red-shirted players trudged off the pitch at Anfield on Sunday after their third consecutive home defeat left them 10 points behind Pep Guardiola’s men, having played a game more.

It means after a run of 68 league games unbeaten at home, Liverpool have now lost three consecutive league games at Anfield for the first time since 1963.

“They are making a lot of excuses,” said Keane, who won the Premier League seven times at Old Trafford. “To me they’ve been bad champions and I don’t just mean today.

“You can lose a game of football but there is a way to get beaten. I don’t see that and I think maybe they have all believed the hype over the last year or two.”

A stubborn Klopp defended his side’s performance up until Alisson’s first error allowed Gundogan to restore City’s lead 17 minutes from time, with his second of the match.

“We scored our goal and in that moment it was possible the game goes in our direction, but Alisson made two massive mistakes,” said Klopp.

“Apart from that the game ends 1-1. The performance was good enough at least to draw, and that’s it.”

The figures make grim reading for the Liverpool hierarchy.

After 23 games this season, Liverpool have 40 points — 27 fewer points than they did at the same stage last season.

That is the biggest drop by any reigning champion at this stage of a campaign in English top-flight history.

Despite his upbeat words, Klopp knows he has a monumental task on his hands to repair the shattered confidence of a team who just months ago romped to their first English top-flight title for 30 years.

Instead of the title, which now appears to be City’s to lose, Liverpool are glancing nervously over their shoulder as the race for Champions League qualification becomes their priority.

Chelsea and West Ham are only a point behind, with Everton, who have two matches in hand, just three back. Tottenham and Aston Villa are also within striking distance.

Liverpool have a few days off this week to regroup as they are not involved in FA Cup action but they then face a tricky trip to third-placed Leicester before a Merseyside derby at Anfield against high-flying Everton.

In between those matches they travel to Hungary for a Champions League match against RB Leipzig, second in the Bundesliga, after the game was moved from Germany.

So what has gone so wrong at Anfield for a side that topped the Premier League table just last month?

Liverpool’s problems at the back are well-documented.

Defensive talisman Virgil van Dijk has been out of action since October and has been joined on the long-term absentee list by Joe Gomez and Joel Matip.

That has forced Klopp to rejig his team, playing Jordan Henderson at the back, depriving the team of the captain’s drive from midfield. Midfielder Fabinho has also been pressed into defensive duties.

Klopp signed two centre-backs — Preston’s Ben Davies and Schalke’s Ozan Kabak — on transfer deadline day and he must surely blood one of them now.

Even Liverpool’s fearsome front three are not firing on all cylinders.

Salah still tops the Premier League goal-scoring charts, with 16 goals this season, but Sadio Mane and Roberto Firmino have managed just 13 between them. 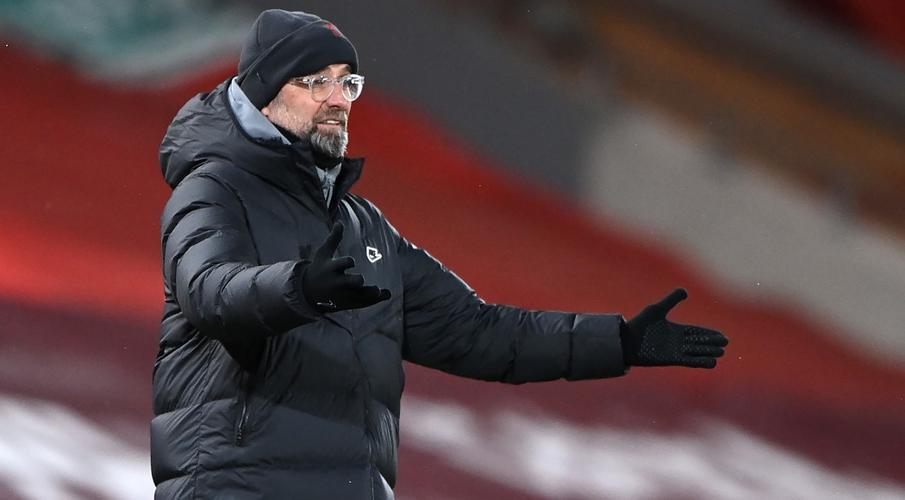 But the biggest problem is recapturing the swagger and belief that made Liverpool an unstoppable force last season — without the support of the vocal Anfield crowd.

A frenzied Kop would have acted as a 12th man for Liverpool after they equalised on Sunday, roaring the team forward.

Instead Liverpool were left to contemplate the collapse of their title ambitions in near silence.

Ighalo can return to Eagles if Rohr really desires – Nwosu

EPL: Hoddle’s candid advice: Where I believe Alexander-Arnold can improve