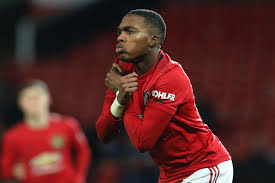 The striker became eligible for a professional contract when he turned 17 in December.

But five months on he is still regarded as a scholar by the club, meaning that he could be approached by other sides who would offer him a tempting first pro deal.

Sotona – who has played youth football for the Republic of Ireland – is seemingly highly thought of at the club, who have often been patient when it comes to rewarding their young players with their first professional deal. Left-back Brandon Williams, for example, had to wait seven months after his 17th birthday to sign his.

read also:AFCON 2021: Why NFF is yet to pay Eagles’ Benin, Lesotho bonus

Wth clubs in Germany said to be monitoring Sotona’s situation, they could potentially consider a move to make him the latest player spirited away from English football to the Bundesliga, according to a report from The Athletic.

Fans mourn ex-footballer called best in the world by Maradona