The 32-year-old superstar’s request apparently put across after he was summoned for a one-on-one meeting with new boss Quique Setien.

The latter moved to Camp Nou last week following Barcelona’s decision to part ways with Ernesto Valverde and has since seen his approval rate soar among the club and its fan-base.

With Barcelona still competing in La Liga as well as the UEFA Champions League, many expect the club to beef up it ranks amid rumors that a number of the current existing players could well seal moves elsewhere.

According to reports in Spain as cited by Mirror, one department that the Catalans aims to strengthen is its front line which features Uruguayan attacker Luis Suarez.

With the former Liverpool star injured and expected to be out of action for at least four months, Messi has seemingly advised Quique Setien to consider bring Sergio Aguero on board as soon as possible.

Momentarily, Barcelona has done very little to suggest that a move could be on the cards for the Argentine striker who became the fourth highest Premier League goalscorer with his brace against Crystal Palace on Saturday. 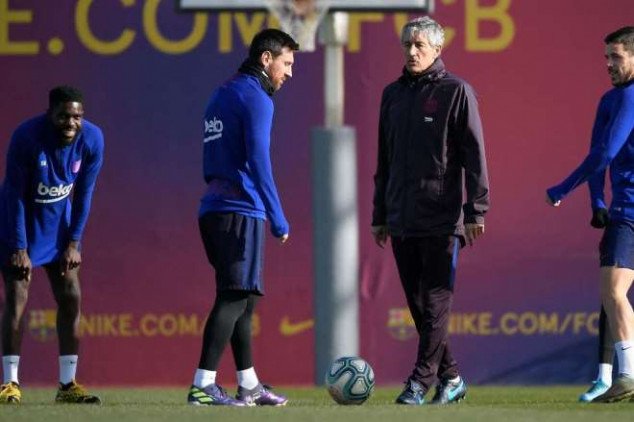 Relatively, Mirror emphasized that Manchester City will not seek to part ways with its all-time top goalscorer albeit having just a year remaining on his current contract.

Sergio Aguero has so far scored 251 goals since joining the Citizens from Atletico Madrid in 2011.

Solskjaer names ‘best left-back in England’ ahead of Liverpool cracker