Jose Mourinho , the special one ,has landed a new job after signing a mega-money deal to return to work for controversial Russian broadcaster RT.

The former Manchester United manager will get his own biweekly show – titled on the touchline with Mourinho – which will focus on covering the Champions League with the inaugural episode to be shown after the last-16 round ties on March 7.

Mourinho, who was dismissed by United back in December, worked with international news channel RT during the World Cup and earned £1.71million (£400,000-a-day) for just four days’ work as a TV pundit.

RT confirmed their hiring of Mourinho, who was in Russia discussing terms for his new show last week, by posting a promotional video on social media on Monday morning.

‘I’m going to talk about football on RT, what else did you think I was going to do?’ Mourinho said at the end of the video after initially teasing he could be changing sports to ice hockey.

Mourinho was in Moscow earlier this month and hit the headlines after falling over as he performed a ceremonial puck drop at an ice hockey game. 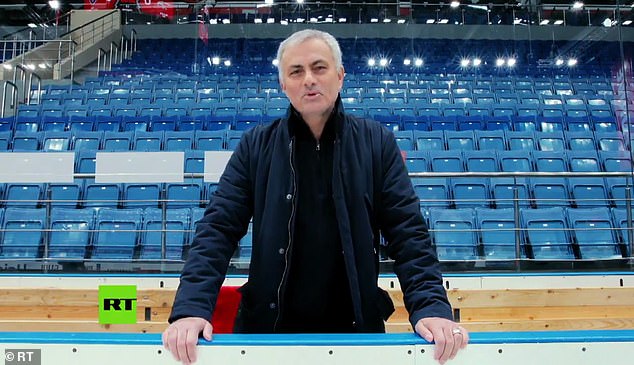 The 56-year-old attended the game during his time in Russia as he and his commercial agents negotiated a deal which will see Mourinho work with the Russian State broadcasters until the Champions League final in Madrid on June 1.

RT’s reputation among Western audiences has long been controversial, with the broadcaster accused of being part of the Kremlin propaganda machine.

Despite mainstream politicians and pundits appearing on its channels in Britain, the U.S., and beyond, a number of academics have claimed it broadcasts distorted information on behalf of Russian president Vladimir Putin.

In 2017 the U.S. Justice Department made the channel register as a foreign agent of the Russian government, which it did under protest despite it being funded by the Kremlin.

And in December last year, UK media regulator Ofcom ruled that seven programs that RT broadcast after the Salisbury nerve gas attacks breached strict impartiality rules. The channel is yet to receive a sanction.

Mourinho has built up an onscreen portfolio since being dismissed by United, working as an analyst for beIN SPORTS, helping drive their coverage of the Premier League and Asian Cup in Qatar last month, where he reportedly bagged £60,000 for his handful of appearances on the programme.

Reports had suggested Mourinho was ready to return to management after receiving his £15m in compensation from United and holding talks with Inter Milan director Beppe Marotta over becoming their boss for the second time.

Barcelona Will Shape Me for W/Cup – Oshoala