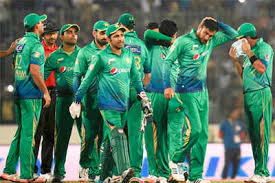 But Pakistan cricket chiefs insist those players unaffected will still depart for the UK on Sunday and the rest can join them later.

Pakistan Cricket Board chief executive Wasim Khan said: “The tour of England is still very much on track.”

None of the ten players had experienced symptoms of Covid-19 before testing positive. All of them will be re-tested tomorrow.

The Pakistan Cricket Board revealed that all players and support staff who have tested negative will as planned fly to Manchester on a charter flight on Sunday. They will be tested again on arrival in the UK.

Those who have tested positive must isolate at home for two weeks before undergoing further testing. If they then test negative, they will be permitted to fly to the UK on a commercial flight.

The tour to England is very much on track and the side will depart as per schedule on June 28.

Khan added: “The recent positive tests of some of the fittest athletes, who had not shown any symptoms, clearly reflect the danger of this virus.

“We will continue to monitor and support the players who have tested positive, including conducting antibody tests, and as soon as they test negative, they will be flown to join the squad in England.

“At the moment, they have been advised to go into self-isolation so that they not only recover quickly but also prevent their other family members from being infected.

“The tour to England is very much on track and the side will depart as per schedule on June 28. Fortunately, all the first-choice red-ball squad, barring Mohammad Rizwan, are negative, which means they can start training and practising immediately after they have been tested and given the all clear when they arrive in England.”

Giles is hopeful there is sufficient time between now and the scheduled First Test at Old Trafford on August 5 for the crisis to ease.

Giles said: “It is a concern and obviously I’m most concerned about those players who tested positive and their welfare.

“At the moment, I don’t think the tour is in doubt. We are far enough away from the start of the Test series not to worry too much at the moment. We’re still hopeful the Pakistan team will be arriving in the country fairly soon.

“But this is the difference with the international sport – we need to get our opposition into the country. Anything that puts that at risk or in danger is clearly a problem.

“There are far more important things than sport but we’re hopeful that, if we can get international sport played, it will be a fillip for many people around the world.”