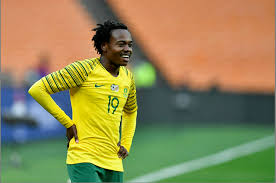 Bafana Bafana of South Africa’s Percy Tau has confessed that the Super Eagles’ second goal broke their hearts because it was scored at a time they were unable to muster a serious comeback against Nigeria in the
2019 Africa Cup of Nations quarter-final clash at the Cairo
International Stadium, Egypt. Tau was very outstanding in the Bafana Bafana’s 1-0 win over Egypt in
the second round but he was clipped by impressive Jamilu Collins when the Eagles defeated them 2-1 on Wednesday.
The winger told SportingLife that they thought the game would get to the extra time after they equalized in the 71st minute of the encounter.
“We were not disappointed with the result, to be honest. It was just unfortunate we conceded a late goal in the match through a set piece,” Tau told SportingLife.
“I think that goal killed off the remaining energies we could have used to see out the game. We didn’t have another chance to muster a comeback.”
read also: Buhari, Atiku Congratulate Eagles for well-deserved Victory
Loading...

FIFA Rankings: Super Falcons move two places up after Round of 16