Serie A: AC Milan on brink of title, Inter hope to spring surprise

It has been 11 years since AC Milan won their last Serie A title, but they need only draw at Sassuolo on Sunday to take home a Scudetto which has been elusive for far too long for a club of their grandeur.

The day has been a long time coming for Milan fans, with the club last winning the title under Massimiliano Allegri in 2010-11, before suffering a spectacular fall from grace.

Just four years after their 18th Serie A triumph, the seven-time European Cup winners finished 10th in the standings, spending an incredible seven seasons outside the top four of the Italian top flight between 2014 and 2020.

Their decline was not helped by matters off the pitch, with various changes in ownership after former Italy prime minister Silvio Berlusconi relinquished control.

After Allegri’s departure in 2014, no fewer than six permanent coaches in five years tried and failed to turn things around, before Stefano Pioli came in to steady the ship.

Progress under Pioli has been gradual, building to this weekend’s moment of truth.

Milan hold a two-point lead over Inter Milan going into the final round of Serie A fixtures. Given they have a better head-to-head record over their bitter rivals, one point is all they need for a 19th top-flight title.

“What the team is doing from a mental point of view it is incredible,” Pioli said after last weekend’s win over Atalanta.

“When we took charge at Milan, the team had completely different tactical ideals and concepts, so we had to change everything.

“We had 10 000 fans waiting for us as we drove through on the bus, that obviously fired everyone up. Now I expect another week like this.”

Should Milan slip up against mid-table Sassuolo on Sunday, champions Inter know victory at home to Sampdoria will see them sneak over the line, led by a manager who has sprung a final-day surprise before.

As a player, Simone Inzaghi scored as Lazio beat Reggina on the final day of the 1999-2000 Serie A season, which was enough to earn them a dramatic second Scudetto as leaders Juventus lost at Perugia to let the Rome club in right at the last.

“Sassuolo are a very good side, they have a lot of individual talents,” Inzaghi said after Inter’s 3-1 win at Cagliari on Sunday.

“I expected a very open end to the season for the Scudetto, European places and relegation. Now we are here, we’ve got to try to go all the way.

“Naturally, we are behind, so we need a victory and for them to lose. It’s happened before, I won with Lazio when we were two points behind and Juventus lost to Perugia, so it can happen again.” 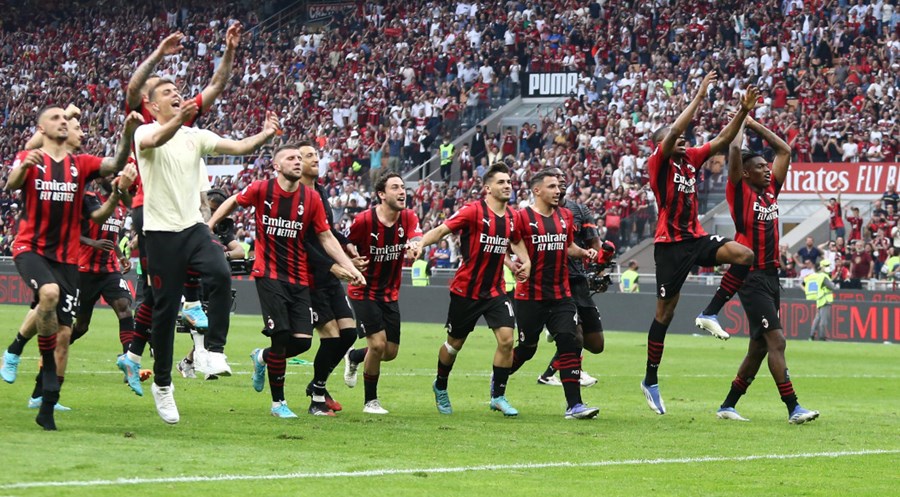 The final day drama culminates in a battle to avoid relegation, with Salernitana, against the odds, in control of their own destiny.

Looking dead and buried, rock bottom of the table just a month ago, after a tumultuous season off the pitch, the side from the Amalfi Coast have gone seven unbeaten, out of nowhere, to climb up to 17th, two points above Cagliari.

A win for Salernitana over Udinese at home will see them survive, while Cagliari face already-relegated Venezia.

Elsewhere in Serie A, Juventus, guaranteed fourth place this term, finish off a disappointing campaign with a trip to Fiorentina on Saturday, while AS Roma can make sure of qualification for next season’s Europa League with victory at Torino on Friday.