The group made up of professionals in various fields of human endeavours had the privilege of impacting fresh ideas to 59 sports coaches who thronged the Media Centre of the Teslim Balogun stadium in Surulere, Lagos.

During the ‘operation train the trainers’ project, the group emphasised more on the need to curb the trend of sudden death through cardiac arrest which almost killed Inter Milan player, Christian Eriksen who slumped during the EURO 2020 event.

The Denmark player dropped to the ground at the Parken Stadium in Copenhagen just before half-time, against Finland to the distress of the players on the pitch. Medics were seen trying to stabilise the former Tottenham player, while his teammates stood in a circle around them to shield them from the cameras.

The group however provided participants with enough educational materials that could enhance player’s health and safety. 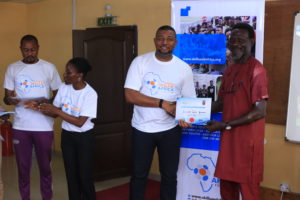 The training project organised under the canopy of the City Sports Group revealed that sudden Cardiac arrest causes players to suddenly collapse without warning or preceding symptoms.

Cardiac arrest can occur during exertion or during the transition from intense exertion to lower exertion – for example, walking after a short sprint and could be prevented as follows:

Once EMS has been alerted, team medical staff should retrieve an AED – a portable device that automatically detects cardiac irregularities and treats them through defibrillation to jump-start the heart.

The player’s chest should be exposed and confirm access to the airway and the facemask removed to facilitate rapid resuscitation.

With the chest exposed, chest compressions should be applied as soon as possible. The AED will perform a rhythm analysis to determine whether or not a shock is needed.

“If a shock is delivered, chest compressions should restart immediately until the player becomes responsive or EMS arrives,”

Speaking at the opening of the programme, Mr Shola Opaleye, founder of the Foundation, revealed why City Sports had to come up with innovative ideas to develop sports in the country through the ‘ train the trainers’ project.

He believes that the foundation of sports development starts from the coaches as they need to always keep abreast of a new trend that would help them to succeed now and in future.

“Coaches are more important in the spectrum of the sporting environment. No coaching. No development. If I set up a school without teachers, there will be no knowledge. Coaches are leaders and mentors to upcoming athletes. Coaches are always there to guide and also stand as a refuge to troubled athletes. They provide shelters in the time of tribulations and trials to their wards. They are the athletes adopted parents.

“The lives of the athletes are in their hands, he continued: ” Coaches are counsellors and motivators. Psychologists and strategists.”

The one-day training centred on various issues such as introduction to coaching, safety, environment, injury and prevention and life-saving venture.

He however listed seven things people should know about leadership as i.e Vision, communication, people’s skills, character and how to respond to challenges (work ethics, humility, competence, honesty, integrity, kindness, fairness, tolerance and respect). others include boldness – don’t be afraid to fail and servanthood.

The group also observed that most coaches don’t always go for refresher courses to update their knowledge.

He defined Sports coaching as a process of nurturing, guiding and training an individual in preparation for any sporting career or event.

Partey requires scan on his ankle after pre-season Chelsea clash

Partey requires scan on his ankle after pre-season Chelsea…