Even though no African country has exceeded the quarter finals of FIFA World Cup till date, their individual talents right from the inception of this tournament have become spectacular over the years.

With the FIFA World Cup right beginning June 14th, every African player’s dream is to be named among the best and clinch victory in the long run.

This dream can only become true if players will sacrifice their best for their country and play as team in the competition.

More also, the feats of African players in World Cup history in recent times cannot be overemphasized as a result of  their remarkable achievements in the tournament.

The Nation looking back the history of football, name the top 10 greatest African players in World Cup history.

However, the selection is based on their individual records and contributions as far as the tournament is concerned.

Madjer (born 15 December 1958) played for the Algeria national team for 19 years, and was present at the 1982 and 1986 FIFA World Cup finals. He retired as the nation’s top goalscorer at 28, in 87 caps, having also won the Africa Cup of Nations in 1990 as the hosts incidentally beat Nigeria twice, in the opening match 5–1 and the final 1–0.

Bwalya (born 16 August 1963) popularly known as the Great Kalu, is a Zambian former international footballer. He is Zambia’s eighth-most capped player and third on the list of all-time top goal scorers behind Go 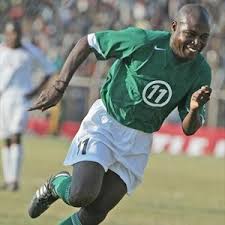 dfrey Chitalu and Alex Chola. Bwalya was named African Footballer of the Year in 1988 by the magazine France Football and was nominated for the 1996 FIFA World Player of the Year where he was voted the 12th-best player in the world, the first to be nominated after playing the entire year for a non-European club

Kanu (born 1 August 1976) is popularly known by fans as “Papilo”. A member of the Nigerian national team from 1994 to 2010, making his debut in friendly against Sweden. At the start of his career, Kanu was instrumental in Nigeria’s overall success at the 1993 FIFA U-17 tournament in Japan and their subsequent 2–1 victory over Ghana in the final. With five goals, he was second joint-scorer in the tournament with Peter Anosike and Manuel Neira, behind compatriot and Captain Wilson Oruma. On 24 June 2010, Kanu ended his international career following Nigeria’s exit from the 2010 World Cup in South Africa. Nigeria lost their group matches against Argentina and Greece, before a 2–2 draw with South Korea ended their stay in the tournament.

Pele (born 5 November 1964) is a Ghanaian former footballer who played as an attacking midfielder and who served as captain of the Ghana national team. He is regarded as one of the greatest African footballers of all-time. He was a captain and was one of the first African football players to earn a top placing in FIFA World Player of the Year voting in 1991 and 1992. He is arguably Africa’s most decorated and honoured football player ever.

Okocha (born 14 August 1973) also known as “Jay-Jay” made his official debut for Nigeria in their 2–1 1994 FIFA World Cup Qualifier away loss against Ivory Coast in May 1993.It was not until his second cap and home debut that he became a favourite with the Nigerian supporters. With Nigeria trailing 1–0 against Algeria, in a m 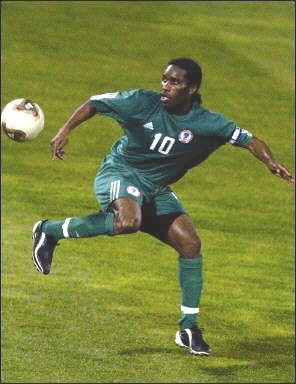 atch they needed to win, he scored from a direct free kick to equalise, before helping the team to a 4–1 win, eventually securing qualification to their first World Cup. In 1994, he was a member of both the victorious 1994 African Cup of Nations squad and the World Cup squad who made it to the second round before they lost in a dramatic match against eventual runners-up Italy. He is best known for his creativity and skillfulness on the field of play.

Milla (born 20 May 1952), commonly known as “Roger Milla” made his first appearance for Cameroon in 1973 versus Zaire in a World Cup qualifier. He was a member of Cameroon’s team at the 1982 FIFA World Cup, having a goal disallowed against Peru in their first match. Cameroon went out with three draws from their three first-round games. He returned to the 1994 FIFA World Cup at the age of 42, being the oldest player ever to appear in a World Cup until the 2014 FIFA World Cup when Faryd Mondragón entered in the Colombia vs. Japan game being 43 years and 3 days old, setting a new record. Cameroon were knocked out in the group stages; however, Milla scored a goal against Russia, setting a record as the oldest goal scorer in a World Cup tournament, breaking the record he had set in 1990.

Weah (born 1 October 1966), became the first and only African player to be named FIFA World cup player and Ballon d’Or winner in 1995. As successful as he was at club level, Weah was not able to bring over that success to the Liberia national team. In total, Weah played 60 games for Liberia over 20 years, scoring 22 goals. As one of the smaller nations in world football and perennial underdogs, Weah did everything he could to support the national squad: aside from being the team’s star player, he also later coached the squad and even funded his national side to a large extent. Despite his efforts, he was unsuccessful in helping Liberia qualify for a single FIFA World Cup, falling just a point short in qualifying for the 2002 tournament.

Eto’o (born 10 March 1981), became the first man to be named African Player of the Year for four consecutive times. He made his first World Cup in 1998, being the youngest player ever to appear in a World Cup until the 2008 FIFA World Cup when Victor Manon, being 16 years 15 days, setting a new record. He scored his sole goal of the 2002 FIFA World Cup when he netted the game-winner against Saudi Arabia during the group stage on 6 June 2002, which was Cameroon’s only win of the competition.

Ukraine, Spain and Portugal to join bid for 2030 World Cup

Boost for France as Coman returns to Bayern training

Ukraine, Spain and Portugal to join bid for 2030 World Cup