Nine of the 10 female wrestlers registered by Nigeria won different colour of medals and this ensured that the team retained its title as the best female team at the 2019 African Wrestling Championship which ended today in Hammamet in Tunisia. 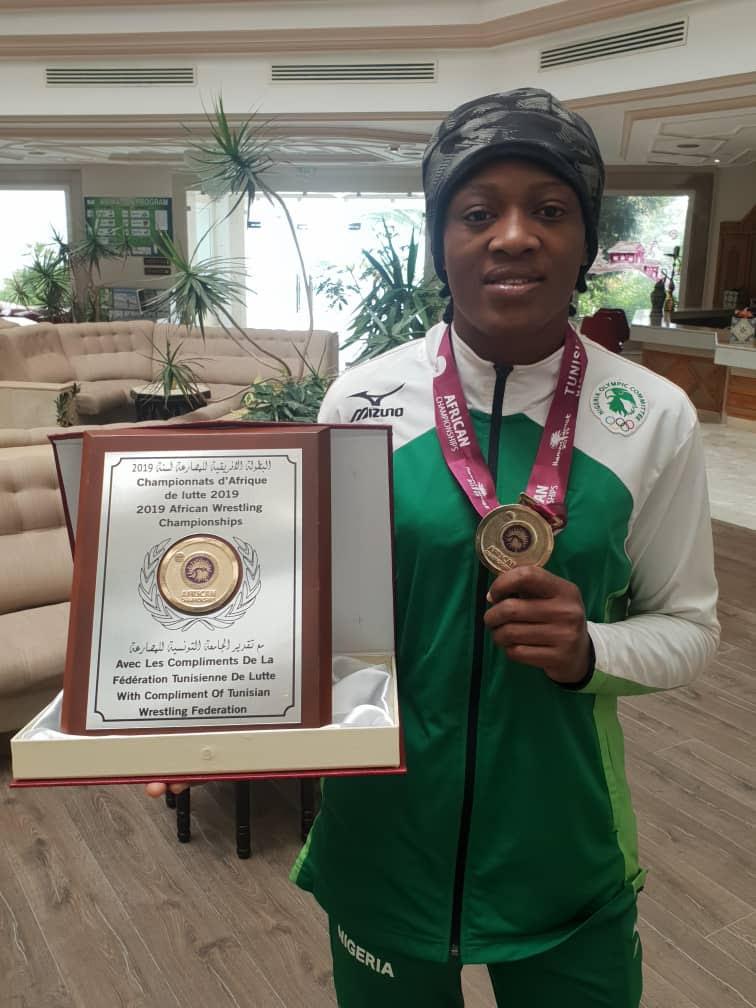 Also for her display coupled with the way she handled most of her opponents, Odunayo Adekuoroye was adjudged the most outstanding wrestler of the tournament.

The nine female wrestlers won five gold, two silver and two bronze medals with only of them missing out from the podium.

It was Sunmisola Balogun that claimed the first gold medal for Nigeria in the 65kg after beating Bukrina Faso’s Yvette Zie 1-0 while Blessing Oborududu continued her dominance in the continent with her ninth gold medal at the continental championship.

In the 57kg, Adekuoroye was outstanding from the first round when she defeated Algeria’s Chaimaa Aouissi and in the final she overwhelmed Cameroun’s Joseph Emilienne Essombe Tiako to be flawless in all her fights. This prompted the organizers to pick the Nigerian as the most outstanding wrestler of the tournament.

However, Aminat Adeniyi and Hannah Reuben settled for silver medals in the 62kg and 72kg respectively. Adeniyi and Rueben lost their final bouts to Tunisia’s Marwa Amri and Egypt’s Samar Hamza. The bronze medals were picked up by Rosemary NWEKE and Ifeoma Nweke in the 53kg and 59kg.

To be crowned the overall champion in the women freestyle event, Nigeria amassed 195points to beat host – Tunisia to second place. The home team amassed 177points with two gold and two silver medals.

Egypt finished third with 160points while Algeria and Senegal were fourth and fifth respectively with 83 and 57points respectively.

NPFL: 3 players sent off in second half, as Sunshine Stars beat Kwara United