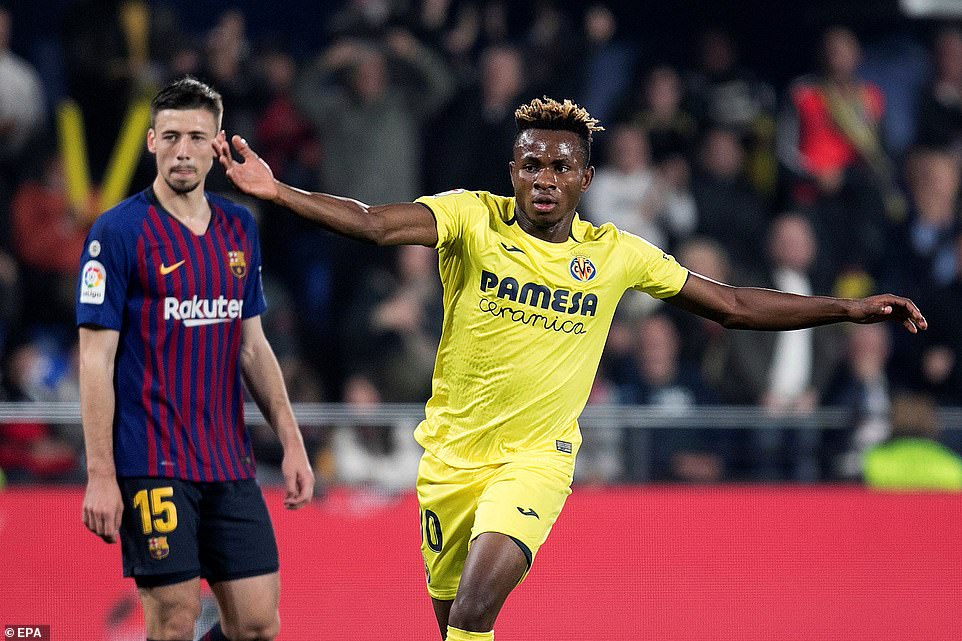 Nigerian sensation Samuel Chukwueze made spotlight with a sterling goal on Tuesday as Villarreal played a 4-4 played draw at Estadio de la Ceramica.

The goal caps a brilliant week for the youngster who was on Monday crowned the Young Player of the Year at the NFF/Aiteo Awards at the Eko Hotel and Suites in Lagos.

The 19-year-old has now scored four goals in 19 games this season for his club. And he has two assists to his credit.

According to statistics, Chukwueze provided one assist, had five shots, won three dribbles and made one tackle before making way for Daniele Bonera in the 87th minute.

At full time Barcelona snatched a point to deny Villarreal a vital victory in their battle against relegation at the foot of the LaLiga table.

The home side had produced a brilliant comeback to respond to a two-goal deficit in the early stages of the contest.

Philippe Coutinho and Malcom had put the visitors ahead. However, Samuel Chukwueze and Karl Tolo Ekambi got Javier Calleja’s men back into the game.

Vicente Iborra put the hosts in front when he clipped the ball over Marc-Andre ter Stegen. Carlos Bacca seemed to have secured the win whe he found the net with 10 minutes remaining.

There would be another twist to the tale when Alvaro Gonzalez was dismissed for a second bookable offence. Barca poured forward and Lionel Messi came off the bench to score a trademark free-kick from the edge of the box.

Even that didn’t look like it was enough to save Ernesto Valverde’s side. Luis Suarez came up with a golden strike for his team with the last kick of the game, dispatching a low strike into the bottom corner after Villarreal had failed to clear their lines from a corner.

The result is a huge blow for Villarreal’s survival hopes, while the visitors escape with a point.

The Goals and Scorers

UCL final: We’ve had a few laughs about settling score…