Bukayo Saka has signed a new long-term deal with Arsenal after Mikel Arteta convinced the 18-year-old to stay at the Emirates. 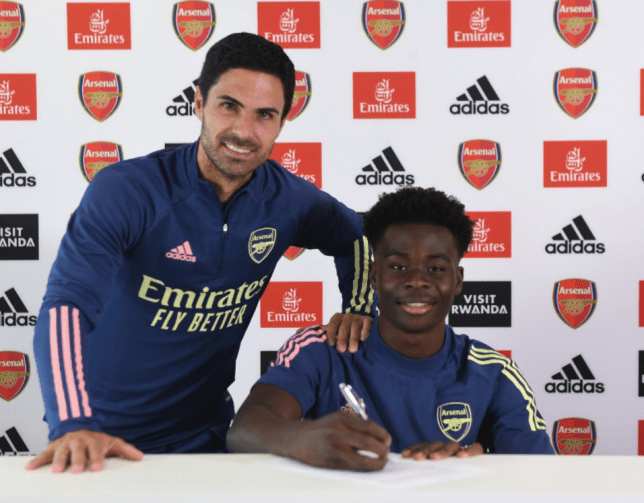 The Gunners boss was all too aware of the growing interest in the London-born teen who he regards as key to his future plans.

Saka, who came through the club’s academy, has made a major impact during the current season after making his debut in the Europa League in 2018.

“He has impressed me with his work ethic and attitude to learn and adapt, and it has paid off in his performances.

“I am excited to continue working with him to develop him further, and for him to help us achieve our goals.”

The player was similarly delighted, as he tweeted: “London is my home. Arsenal my team. I’m so happy to finally announce my contract extension.

“I love playing for this club and I’m looking forward to what the future holds.

“The hard work continues so I can continue living my dream. God is Great!”

Highly-rated winger Saka had turned the heads of Liverpool, Manchester United and Chelsea who were reportedly willing to offer him way more than the £7,000-a-week that Arsenal had initially put on the table.

The Gunners are now understood to have significantly improved their original offer.

Arsenal have limped to just one League win following the Premier League’s restart but the versatile teenager has been the break-out star of what has been an otherwise miserable season for the Gunners.

He proved to be his team’s best performer as Arsenal laboured to break down a struggling Brighton side and has shown versatility in fitting into a different position in all four games since the restart.

Arteta revealed he was confident that the Hale academy graduate would commit his future to the Emirates ahead of Arsenal’s win over Southampton.

He said: “I am very positive that everything is going to be done with Bukayo very shortly.

“The communications between the club, the agents and the family have been going on for months and are very fluent.

“But the player knows how much trust I have in him and every week he is showing his consistency level is getting better and better.

“I am so excited by the young players we have. They just need the right environment around them to explode.

“But Bukayo is already doing that despite our difficult circumstances, which is even more merit for him.”

The club has also confirmed that David Luiz, Pablo Mari and Cedric Soares have agreed contracts to stay at the Emirates, while Dani Ceballos will remain on loan from Real Madrid until the end of the season.

Luiz has agreed a one-year extension while Mari and Cedric will sign permanent four-years deals when their current loan agreements expire.

Technical director Edu said: “I am really happy that we will have these players in our squad for the future.

“They have been part of the long-term technical plan Mikel and I have developed. They bring the right balance to our squad.”