By Segun Ogunjimi, Abuja Last updated Jun 26, 2019 0
Super Eagles’ Technical Adviser, Gernot Rohr came to the rescue of the nation when he pleaded with the protesting Super Eagles’ players who refused to attend morning training session as a result of unpaid allowances and match bonus. 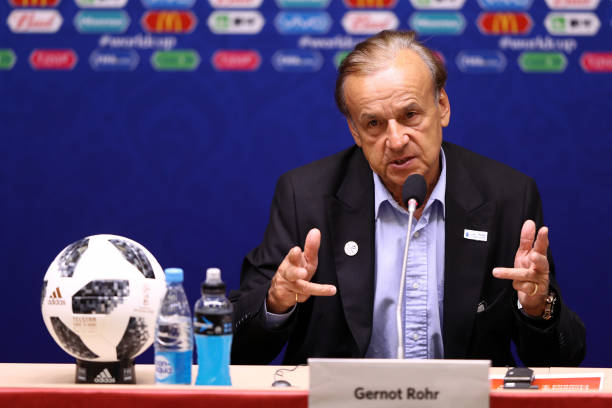 The protest news filtered on Tuesday afternoon while the Nigeria Football Federation officials claimed to be sorting out the players funds from the Federal Government.
SportingLife.ng in its investigative manner contacted the Eagles’ Manager who opened up on the situation and how he was able to pacify the players before they accepted to train in the evening.
“Segun, the situation is now under control. The problem is that the Federation is owing the players one month camp allowances and the Zimbabwe’s friendly match appearance fees. The Federation promised to pay the money yesterday (Monday) but the players did not get the money. So this morning they refused to train until the money is paid.
“So I had to beg them to give the Federation a little time up till Friday to pay them. I told them to please continue to play for the country because of the football loving President (Muhammadu) Buhari and football passionate Nigerians and they agreed.

“So no more problems for now. Our training went well this evening and I can assure you that the players will give their best to win the match against Guinea”, Rohr told SportingLife exclusively from Egypt.  Today’s match is scheduled for 3.30pm Nigeria time.
2019 Africa Cup of NationsGernot RohrLatest Sports NewsNigeria v Guineasportinglife.ng