By Tunde Liadi Last updated Jun 25, 2019 0
Super Eagles head coach, Gernot Rohr has asserted that even though Ikechukwu Ezenwa has fully recovered from the injury he suffered in Asaba during their final build up to the 2019 Africa Cup of Nations but that Daniel Akpeyi remains the overwhelming choice for the number one spot against Guinea. 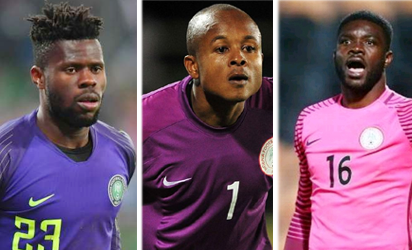 Rohr disclosed that the decisions on who man the posts for the Eagles against the Syli Nationale will be decided by him and the goalkeeper trainer, Alloy Agu and the assistant coach, Imama Amapakabo who was formerly a goalkeeper but that the performance of Akpeyi against Burundi has given him an edge over Ezenwa.
“Yes, what we have at the end of the three weeks training is that Akpeyi remains our number one,” Rohr told the media.
“I don’t decide who keeps for us alone, we have the goalkeeper trainer, Alloy Agu and my assistant coach, Imama Amapakabo is a former goalkeeper.
“Ezenwa had an injury in one of our training sessions in Asaba and it gave the opportunity to Akpeyi who kept for us in our friendly games and he did well.  There was no reason to change him during our first game against Burundi.

Read Also: We were lucky against Burundi, Akpeyi admits

“Now Ezenwa is back from injury and there is a real competition now. We agreed that Francis Uzoho is number three. Akpeyi kept a clean sheet against Burundi and he is in pole position to be picked again.”
Daniel AkpeyiGernot RohrIkechukwu EzenwaLatest Sports Newssportinglife.ng