Breaking! Brazil are through to the World Cup quarter-finals

It’s all over! Brazil reach their seventh consecutive World Cup quarter-final thanks to second-half goals from Neymar and Roberto Firmino. Meanwhile, Mexico exit at the last 16 stage for the seventh straight World Cup.

Game, set and match to Brazil. Neymar beats the offside trap and bears down on goal. He takes the shot on early but Ochoa gets a boot to the ball. The rebound falls kindly for Firmino, who taps home from close range to spark wild Brazilian celebrations.

Neymar starts the move off with a beautiful back heel to Willian, who bursts around the outside before playing a low cross towards the back post. There are yellow shirts queuing up to tap the ball into the back of the net and it’s Neymar who gets the final touch for his 57th international goal. 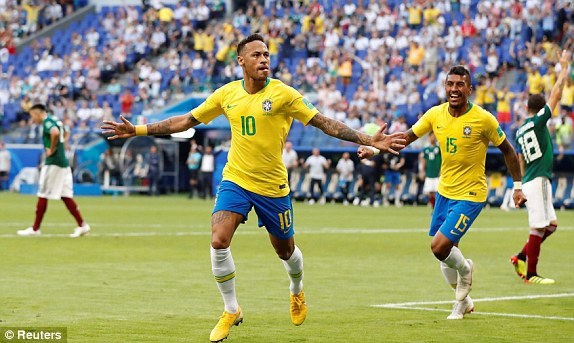 HT: There’s no stoppage time at the end of the first-half. The referee brings a close to an opening 45 minutes which saw Mexcio star brightly. The pace they have in attack was causing problems but Brazil eventually grew into the game. They had chances through Neymar and Jesus but neither could beat Ochoa as head into the break goalless.

Will Neymar follow both Lionel Messi and Cristiano Ronaldo out of the World Cup?

The third member of football’s most acclaimed triumvirate – Brazil striker Neymar – will hope to avoid the same fate when his team tackle Mexico. Neymar and Brazil should march on, but Russia 2018 has been crammed with tales of the unexpected.

We’ll be bringing you all build-up from the Samara Arena , including the all-important team news shortly.

The action then gets underway at 3pm and you can follow match updates here!

Brazil last failed to reach the quarter-finals of the World Cup back in 1990. Since then, they’ve always made it to the last eight of the tournament.