Chelsea striker Tammy Abraham has hit back at speculation he’s demanded in excess of £180,000-a-week to sign a new deal at Stamford Bridge.

The Blues are keen to tie the forward down to a new long-term deal after his breakthrough campaign in west London, where he’s outgrown the deal he signed in 2017.

Abraham still has two years to run on his existing deal but reports claimed the forward had rejected Chelsea’s latest offer as he was holding out for a far larger deal.

It’s claimed that the striker wanted around £180,000-a-week to stay at the club, in effect making him the highest paid player at Stamford Bridge.

The Telegraph claimed on Wednesday that Abraham had not demanded to become the club’s highest paid player and was instead working on his fitness before the coronavirus outbreak forced the Premier League season into suspension.

Responding to a Chelsea fan account that linked to the story, Abraham said: ‘Finally some real news’. Chelsea had been working hard on contract renewals but the postponement of the league season has made things more difficult. 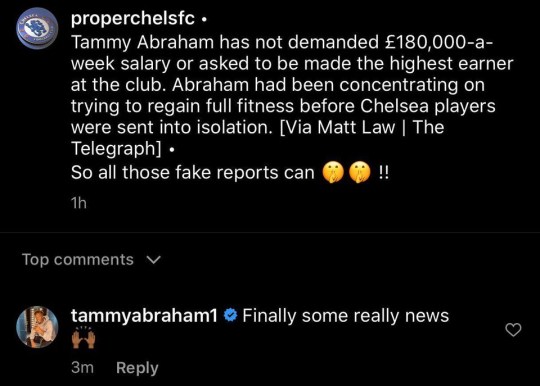 Pedro, Willian and Olivier Giroud are all out of contract at the end of the campaign but the season is set to spill over into the summer.

The Premier League are exploring legislation that would allow clubs to offer short-term deals to players in order for them to be able to finish the season with their clubs.

However, much could depend on when the season is allowed to stay as much remains undecided during the pandemic.