Goals in both halves by Godwin Aguda and Isaac Loute secured a 2-0 win for Enugu Rangers against Burkina Faso league champions Salitas in a must win CAF Confederation Cup encounter played on Sunday, February 3. 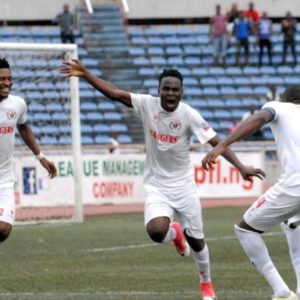 Drawn in a difficult group with Tunisian giants Etoile Sahel and CS Sfaxien, the Nigeria Professional Football League (NPFL) side needed a win against Salitas in their opening group B game.
Godwin Aguda scored the opener for Enugu Rangers in the second minute at the Nnamdi Azikiwe Stadium also known as The Cathedral.
Rangers failed to extend their lead at the halftime break before Isaac Loute scored the second goal for The Flying Antelpoes in the 60th minute.
Enugu Rangers beat Bantu of Lesotho 2-1 in their last qualification game to progress to the group stage of Africa’s second tier competition.
Gbenga Ogunbote’s wards will travel to CS Sfaxien of Tunisia for their second group game scheduled for Wednesday, February 13
Rangers will then face group favorites Etoile du Sahel in a doubleheader fixture on February 24 and March 3 in Sousse and Enugu respectively.

Bad day for Iwobi  as Arsenal fall to Man City