Anthony Joshua’s next fight against Kubrat Pulev has been postponed as the coronavirus pandemic KO’s the original June 20 date. 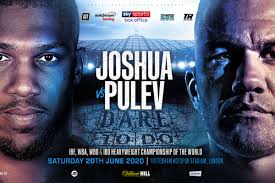 Joshua’s mandatory defence against the 38-year-old Bulgarian now looks destined for the reserved July back-up slot with promoters Eddie Hearn and Bob Arum sweating on the state of the mega-money pay-per-view stadium fight at Tottenham.

Hearn previously revealed he had organised a reserve date with staging the unified title clash behind-closed-doors out of the question.

The British Board of Boxing Control announced they had extended their ban on boxing events until at least May.

Hearn had been forced to axe Dillian Whyte’s clash against Alexander Povetkin and Derek Chisora and Oleksandr Usyk’s headliner as the COVID-19 outbreak continues to sweep the globe.

The decision to backdate Joshua’s defence against Pulev – who pulled out of fighting AJ in 2017 through injury – is the latest bump in the road for a potentially historic undisputed title decider against newly crowned WBC champion Tyson Fury.

Fury himself has seen his trilogy bout against Deontay Wilder, who he drew against in 2018 but dethroned last February, moved from July to October after promoter Arum admitted the heavyweight rivals needed to conduct a proper training camp.

Matchroom announced they are still continuing to “explore the possibility of hosting this fight at the Tottenham Hotspur Stadium”.

But the Premier League season is also facing a fight to get back underway and Spurs could need their ground to host games when they would have been otherwise free to stage their first every boxing match.

The decision to postpone Joshua’s UK return – having spent 2019 fighting Andy Ruiz Jr in New York and then Saudi Arabia – should come as no surprise – as cheeky challenger Pulev already told his fans the news earlier in the week.

He said: “Despite humanity’s most difficult fight to date and the underestimation of the effects on the world of the coronavirus, we will be forced to learn to live in a new, not so pleasant, way that millions of people around the world will be mildly unhappy.

“Despite the difficulties, we must find new opportunities to smile, to transform our lives so that despite all the unpleasant things, to remain happy and to believe in a better future, and that all of this is, after all, for good!

“This is exactly why, despite my real view of the situation, I strongly believe that a world title match can be held on the new date of July 25.”