Doctors give update on Osimhen’s surgery, uncertain about recovery date

Doctor Gianpaolo Tartaro said Victor Osimhen’s surgery procedure lasted close to five hours and maintained that there is also a risk for a second surgery.

Gianpaolo Tartaro who operated the Napoli striker on Tuesday spoke to Napoli based station, Radio Kiss Kiss, said the process was difficult and revealed that the player suffered crushes on his cheekbone and not fractured as widely reported by the media

“It was a long intervention lasting for four and half hours. Surgery was the beginning of the whole post-phase, Osimhen had a crush and didn’t have a fractured like Paleari of Benevento had. It was an extremely difficult operation, even the tissues, muscles, nerves, arteries, and everything in between above the skull .

“From the image from the TV, we could see, he couldn’t open his eyes, because eyeball pushed out and cheekbone going in, narrowing the orbital cavity. We Synthesized with five-place held by 16 screws,” he said. 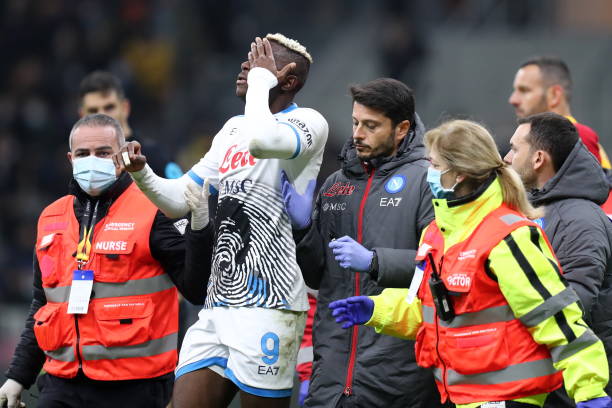 On the possible recovery date, The Professor said everything depends on Osimhen and his body.

“Recovery time?, much depends on him and his body, I don’t have a crystal ball and I can’t know when he will recover. 90 days prognosis is uncertain because if there is any problem, he must return to the operating room.” He added.

The 22-year-old suffered the injury following a clash of head with Inter Milan’s defender Milan Skrinia on Sunday.

We are solid nobody is selfish in our team, says Man City’s Jesus