Dollar rain continues as Eagles get $575,000 from Sanwo-Olu, Okunbor

The dollar rain on the Super Eagles for qualifying for the last eight of the Africa Cup of Nations after Saturday’s defeat of Cameroon continued. 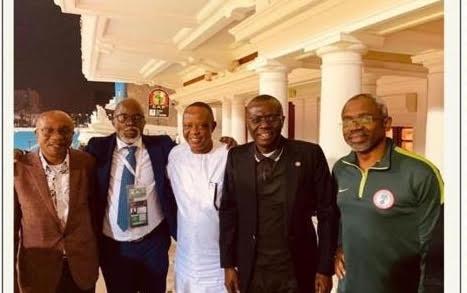 Splashing the cash on the players were the Lagos State Governor, Babajide Sanwo-Olu and Captain Hosea Wells Okunbor, a staunch financier and supporter of the Eagles.

Both were at the Alexandria Stadium in Egypt to watch the match in the company of other dignitaries which included the Speaker of the House of Representatives, Rt. Hon. Femi Gbajabiamila.

In a press statement, he Nigeria Football Federation has commended top Nigerian dignitaries who were in for cheering the Super Eagles to victory over Cameroon in an interesting AFCON 2019 Round of 16 clash.

Acting President of the NFF, Barrister Seyi Akinwunmi listed the top officials and said the Federation is immensely grateful to them not only for their presence but their passion in cheering and believing in the Super Eagles to overcome even when the team fell behind in the game.

“We want to specially thank the Speaker of the House of Representatives, Rt. Hon. Femi Gbajabiamila; the Executive Governor of Lagos State, Mr. Babatunde Sanwo-Olu; the Governor of the Central Bank of Nigeria, Mr. Godwin Emefiele and; Captain Hosea Wells Okunbor, a staunch financier and supporter of the Super Eagles.

“These distinguished personalities not showed up at the Alexandria Stadium; they oozed passion and love for the game of football and for our dear nation. They were so much involved and always believed the Super Eagles would carry the day.”

Nigeria will take on South Africa in a much –anticipated quarter final duel at the 75,000 –capacity Cairo International Stadium on Wednesday night.  The President of AITEO Group, NFF’s Optimum Partner, Mr. Benedict Peters weighed in with the sum of $75,000 for the entire team for the three goals scored, at $25,000 per goal as he promised before the match.

These financial gifts are aside the $12,500 per player that the Nigeria Football Federation will pay the players for a place in the last eight.

Dembele not ready for Juve

Ronaldo tops chart for highest-earning athlete on Instagram during lockdown

Dembele not ready for Juve