France 2019: Falcons get ref who has issued four yellow cards to Nigeria

Falcons have been given a referee from Honduras who has issued four yellow cards previously to a Nigeria team ahead of its last group match against France tonight at the ongoing FIFA Women’s World Cup. 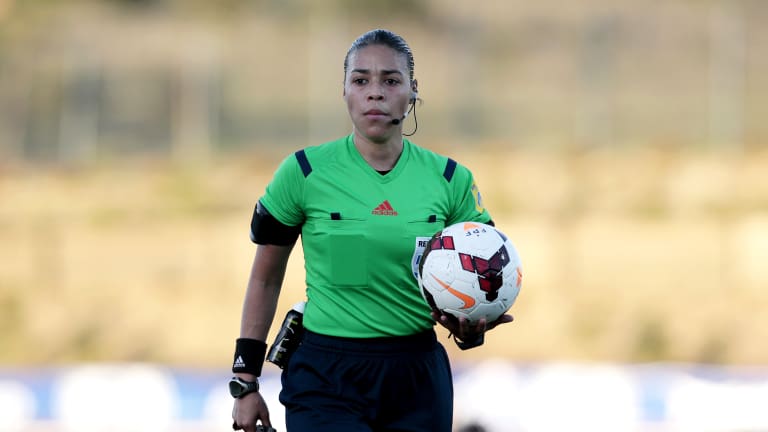 33-year-old Melissa Borjas took charge of Nigeria’s U-20 FIFA Women’s World Cup group B match against Spain in Papua New Guinea which the Falconets won 2-1. Ihuoma Onyebuchi and Chinwedo Ihezuo who is part of the Falcons set-up got Nigeria’s goals.

Despite the victory, four yellow cards were issued to the Nigeria players by Borjas with one leading to the dismissal of defender, Gloria Ogbonna in the 85th minute of the encounter. Other players who were part of the 2016 squad and are in France are Chinaza Uchendu and Rasheedat Ajibade.

A finance graduate from one of the universities in her country, Borjas has been on the FIFA International referees list since 2013. She has been a referee since 2011.

Four years ago, she had the privilege of officiating the match between Japan and Ecuador at the FIFA Women’s World Cup in Canada, her first at the senior level.

Tonight’s game would be the second for Borjas in this competition having handled the Australia, Italy match.

Another highlight of her career was when she became the first and only woman referee to have ever officiated a Honduran final league match prior to this year’s FIFA Women’s World Cup.

She will be assisted by compatriot Shirley PERILLO (First Assistant) ,Elisha MARISCAL of the United States of America is the second assistant referee, Maria Belem CARVAJAL from Chile as fourth official while New Zealand’s Danny MAKKELIE will serve as the Video Assistant Referee.

Nigeria need a win to increase their chances of reaching the round of 16 having lost their opening match to Norway before bouncing back in their second game against Korea Republic to win 2-0. They can still qualify with a draw which is still subject to the results of the other groups.

The last time both countries met was last year in a friendly which France won 8-0.  It was the first match for Swedish coach, Thomas Dennerby who was just taking charge of the team.

Already, Desire Oparanozie, Rita Chikwelu and Francisca Ordega – all must play with caution as they are each on a yellow card and would be ruled out of the Round of 16 if they are cautioned against the Les Bleues tonight.

Emery ‘not afraid’ of ‘favourites’ Man Utd after ‘surprise’ result

Emery ‘not afraid’ of ‘favourites’ Man Utd after ‘surprise’…