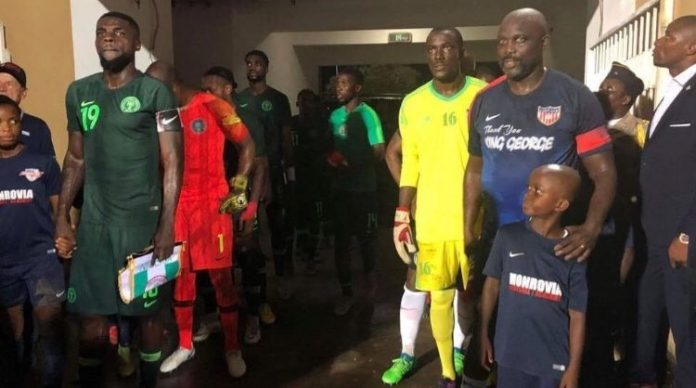 Though Tuesday’s football match between the senior national teams of Nigeria and Liberia was an international friendly match, but some football analysts have reckoned that the encounter in Monrovia was twisted and apparently reduced to a farce by Liberia’s President George Weah.

George Weah, cannot, possibly feel any remorse for what transpired in Tuesday’s game, neither will the Nigeria Football Federation, who forehand knew about the intentions of the Liberian President – and his former teammate James Debbah, now 41 – to play, but still allowed Super Eagles gaffer, Gernot Rohr, list a near A-list squad.

Two Nigerians scored their first international goals – Henry Onyekuru and Simeon Nwankwo – and a third – John Ogu – was named captain for the first time – a tremendous occasion for the trio – but sadly, they recorded the feat against a 51-year-old retired footballer turned Politician. 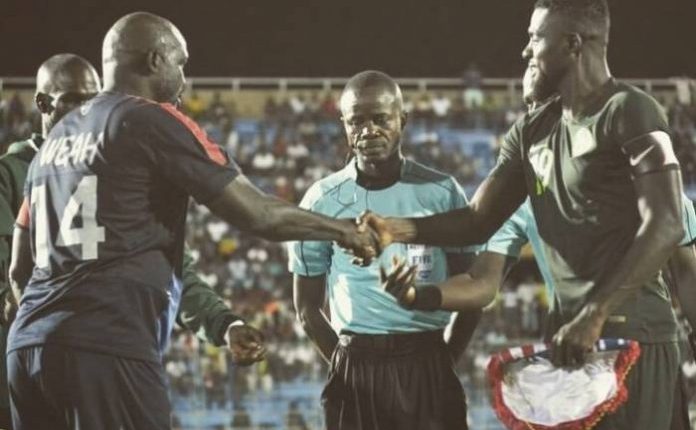 One of the football analysts with tweeter handle (@biolakazeem) argued that as far as the friendly was concerned, the Liberia President reduced what would have otherwise been another meaningful competitive game to a farce.

He wrote on twitter; “George Weah playing for Liberia is a real joke and disrespectful of the Super Eagles. If he wants to have some fun, he can invite his fellow ex-players to play an exhibition game. This supposed to be a serious match, not a kick about.”

The last time Liberia and Nigeria played, at senior level, was in 2001 during the FIFA 2002 World Cup qualifier. Over two legs, Weah, then captain of the Lone Stars came close, failed to help his team secure a World Cup ticket.

According to #Footballiveblog on the matter,”Tuesday was supposed to be a revenge mission, but it turned out to be another disappointment and particularly for the aspiring stars in the team, their shine was dimmed by the super imposed figure of an ex-football star, Politician and President of the republic, who couldn’t starve off the urge to sit back and cheer.”

The not serious friendly which ended 2-1 in favour of the Eagles saw Weah played for 79 minutes and also retired his number 14 jersey that he wore in his football days.

President Weah however described the Super Eagles of Nigeria as a model that he wants his country to model. In his playing days, Weah was an inspiration to young Africans who watched the Liberian in the colours of AC Milan, Paris Saint-Germain or even in his twilight at Chelsea.