Kelechi Iheanacho has yet received more criticism for his poor sportsmanship  in Leicester City’s 1-1 draw against Norwich in Saturday’s Premier League game. 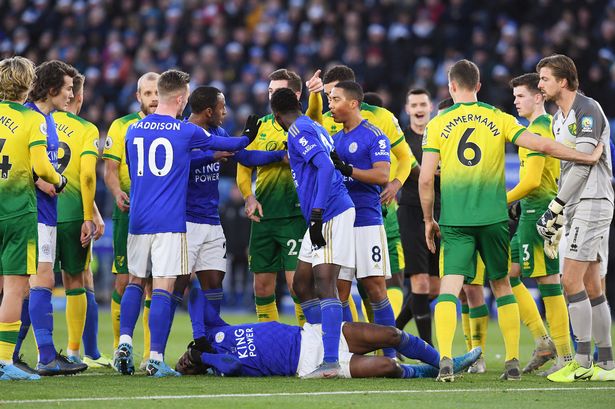 Former Nigeria international Victor Ikpeba insists Iheanacho should have done the ‘gentlemanly’ thing and played the ball out  of play due to an injury to a Norwich City player.

Instead of giving the ball back, Iheanacho playing just his second league start of the season, ran with the ball to try and capitalise on the moment before being  kicked to the ground after getting to the edge of the penalty box and got grabbed by the throat by Todd Cantwell whilst surrounded by the entire Norwich team.

Ikpeba added that as a former striker he knows the former Manchester City forward is hungry for goals now he is on form hence the reason to continue playing.

“We all celebrate fair play in football, I think FIFA emphasises on that,” Ikpeba said on SuperSport ‘Monday Night Football’.”Iheanacho should have been a gentleman, I think it was wrong for him to have continued to play especially after what happened; but Iheanacho is back in form, he is obsessed to score goals now so i can understand,” the former Monaco star added.

Similarly, SkySports Pundit Chris Kamara said the Nigeria International should have known what to do after he was given the ball instead of looking to take advantage of the situation.

Chris Kamara said: “We all know what he (Iheanacho) should have done. Common sense prevailed at Stockley Park when they looked at this.”

However,  Iheanacho’s boss Brendan Rodgers confirmed that substituting the 23 year-old was due to tactical reasons and not the fair play incident involving the opposition.

“It was one where we wanted to go to 4-3-3 and when we moved him out to the side, he’s not a natural winger, he’s not one who can play on that outside,” Rodgers told Leicester Mercury.

El Clásico: How Barcelona XI could set up against Real Madrid