Lukaku among stars to wish ex-coach swift recovery from surgery

Inter Milan forward Romelu Lukaku has sent a message of support to former manager Ronald Koeman after he underwent a heart procedure in Amsterdam.

The 57-year-old, who coached Lukaku at Everton, was rushed to hospital on Sunday evening with chest complaints and underwent cardiac catheterisation.

Koeman has been boss of the Dutch national team since February 2018, and the KNVB have released a statement to confirm he will return home on Monday after successful treatment.

Lukaku has posted a picture of the pair in training at Everton, accompanied by the caption: ‘Get well coach! Hope you recover quickly!’

Holland and Liverpool midfielder Georginio Wijnaldum also posted a photo on Istagram with the message: ‘Wishing you soon recovery coach.’

Meanwhile Morgan Schneiderlin, who worked under Koeman at Southampton and Everton said: ‘Prayers are with you! Stay strong @RonaldKoeman.’ 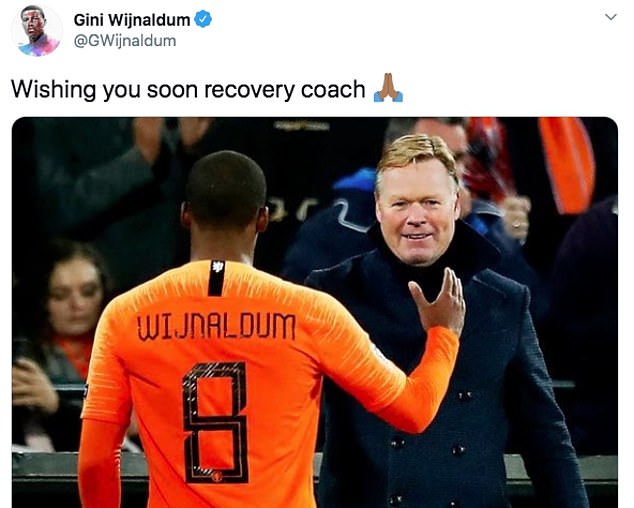 The Toffees have also sent the former Barcelona a compassionate message, writing: ‘Everyone at #EFC would like to wish former boss @RonaldKoeman a speedy recovery.’

The surgery performed on Koeman typically involves the placement of a long, thin tube into a vein or artery without general anaesthetic, meaning the Dutchman is due an extended period away from the dugout.