Israel Adesanya: ‘I have studied Anderson Silva for years’ 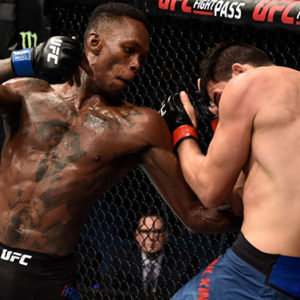 Adesanya will face the 43-year-old Brazilian legend, who is returning to the octagon after two years out of the sport due to a drug suspension, at the Rod Laver Arena, venue of the Australian Open tennis finals in Melbourne.
The 29-year-old said: “I know him (Silva) better than he knows himself, my team has been studying him as well and I have been studying him for years.
“So I just know; I feel I can mimic him; some of his fights I can actually mimic the sequences that he’s used to finish the guys off, or to get the guys started before he finishes them off.
“I just know too much, and the difference is the way that I am playing the game: the mind. My mind is different, I am Player 1.”
Adesanya, who is based in New Zealand, had a perfect record of four wins from four fights in 2018 which saw him climb up to sixth in the middleweight rankings and he is also undefeated in 15 fights as a mixed martial artist.
Anderson Silva is a former UFC middleweight champion and had the longest title reign in UFC history at 2,457 days. This started in 2006 and ended in 2013 and included a UFC record 16 consecutive victories in that span.
Loading...
Anderson SilvaIsrael AdesanyaUFC 234