Nigeria-born mixed martial arts fighter Israel Adesanya wants Africa to host the Ultimate Fighting Championship (UFC) in the future and would love to compete on the UFC’s first-ever card from the world’s second-largest continent. 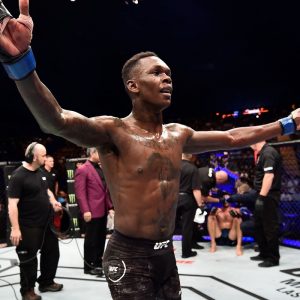 Adesanya said in an interview with ESPN.“It is already in the works, we’ve been talking about it for a while.
“I have talked to Dana White as well when I had my meeting with him. Eventually we’re going to have a lot of guys.
“Kamaru Usman is fighting for the title next; he is a Nigerian-born fighter and he is going to fight for the title next against Tyron Woodley, so he might be the first Nigerian UFC champion. But I don’t mind. I will be the second Nigerian UFC champion. That would be cool, to take it back to Africa.”
Adesanya, who is born in Lagos but now based in New Zealand, is regarded as one of the rising stars of the UFC and will face Brazilian legend Anderson Silva at UFC 234 in Melbourne, Australia, on Sunday.

No action for Iwobi as Liverpool hammers Everton

No action for Iwobi as Liverpool hammers Everton

Salah brace sees Liverpool down Everton to keep pace with…