Joshua: ‘I’m ready for whatever pain or torture to beat Tyson Fury’

Anthony Joshua is gearing-up for his era-defining Tyson Fury showdown with a bullish attitude, insisting he’s prepared for ‘torture’ during training for the clash.

While doubts and promises swirl around the Battle of Britain clash – with Fury’s camp growing frustrated in negotiations, while Eddie Hearn is assures new is coming – both men are in full training.

The fight will unify the heavyweight division and the winner will go down as the undisputed king of his generation. Joshua is as hungry as ever, and he’s certain he can fell the Gypsy King.

‘Am I excited? I ain’t excited, it is what it is,’ Joshua told the skipper of his hometown club, Watford’s Troy Deeney, on the striker’s podcast.

You can take the boy off the estate but you can’t….. you know the rest 🩸 pic.twitter.com/qXTZdkP7vB

‘I’m getting ready to walk through a brick wall and nothing is getting in my way. I’m ready to go through whatever pain, torture, adversity I have to go through in order to win, that’s why i’m really looking forward to it.

‘I know I’m the man of this division and I will be for a long time. I came through this game quick and the way I had to learn was through mistakes, on the public stage as well.

‘I came into this game not to take part but to take over, I feel I’m on a different wavelength and frequency.

‘I do it with a smile on my face but I’m dedicated to these things. Recapping over Covid I thought, man, I’ve put a lot into this and now I need to back myself.’

Joshua is the Gypsy King’s latest target, who he’s been labelling him a ‘bodybuilder’ for years. In his latest rant, Fury called his next opponent: ‘A big, useless dosser. Not a real fighting man. A hype job. Bodybuild(er), crossfit, big, ugly s***house. That’s Anthony Joshua.’

‘I’ve learnt a lot with that. The man will talk about drinking pints and he’s not interested but yet he wants to look chiseled, he’s training the hardest he’s ever trained, he’s the skinniest he’s ever been.

‘AJ has a good body and he trains so he wants to be a body builder, but Tyson Fury would do the exact same thing if he could. I am everything he wants to be. 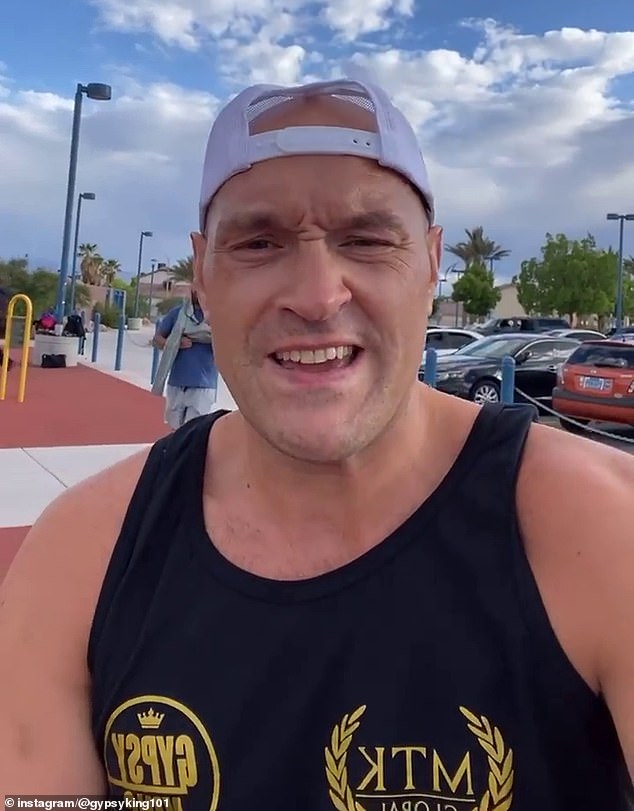 Fury has enjoyed firing shots at Joshua, and repeatedly has labelled the fighter a ‘bodybuilder’

‘I promise you I’m honoured, I’m humbled, I know it’s going to be tough but I truly believe I am tough enough to go through it. I don’t need to talk about Tyson Fury and I don’t need to belittle the man, he can do what he wants.’