Joshua targets Ortiz fight after US debut against Miller

Anthony Joshua revealed he thinks he will fight Luis Ortiz once he has dealt with Jarrell Miller in his American in June.

Fight fans are desperate to see Joshua take on Deontay Wilder or Tyson Fury, but team AJ has struggled to come to terms with the heavyweights’ respective camps. 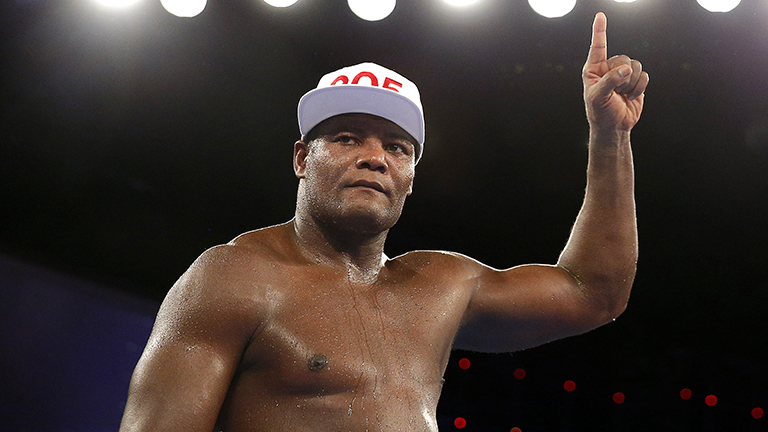 Wilder, Fury and Dillian Whyte turned down offers to fight Joshua at Wembley in April, forcing the IBF, WBO and WBA (Super) champion to reshuffle his plans and schedule his fighting debut on American soil.

Joshua is in the midst of a promotional tour across America and is facing questions about why he is not fighting Wilder. ‘It’s a power move, as well as a passionate move for the love of the sport,’ Joshua said on American radio show, ‘The Breakfast Club’. ‘Tyson Fury and Deontay Wilder were talking about blacklisting me, they don’t really want me to be leading the pack in terms of negotiations, which is weird to me because there’s enough for everybody to eat.

‘Once I get Big Baby out of the way, I can look directly at Luis Ortiz. That’s the next guy I feel [I’ll fight], once I’ve broken the US market.’ While Joshua admits he and Wilder must shoulder the blame for a unification fight not happening, the WBC champion claims his rival’s team are refusing to do business. Wilder was all set to fight Fury in a rematch of their December clash, but that encounter has been thrown into doubt after Fury signed a promotional deal with ESPN and Top Rank.

Bob Arum, the head of Top Rank, famously has a strained relationship with Wilder’s advisor, Al Haymon, although the WBC are still confident both parties will come to an agreement. Talks are further complicated by the fact Wilder fights on Showtime Boxing, but Fury’s promoter Frank Warren insists his heavyweight is now in a much stronger position to negotiate. Joshua appears at Madison Square Garden in June and Wilder and Fury could stage their rematch just a few weeks earlier.