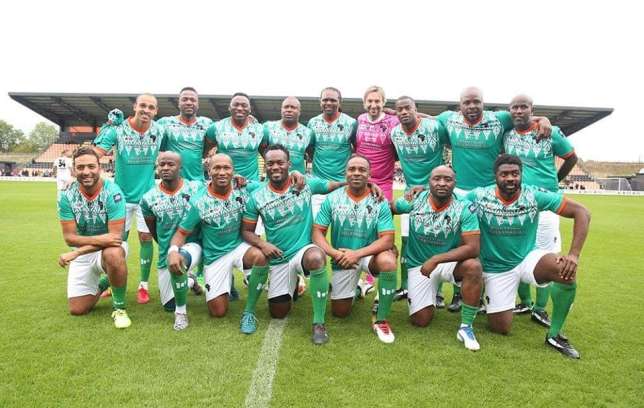 Nigerian football legend, Nwankwo Kanu has heaped plaudits on Petrolex Oil and Gas and other sponsors of the Legends’ Charity Football game, which took place at The Hive Stadium in London for their support in making the programme a huge success.

Speaking about the event which was tagged the Petrolex Kanu Cup, the former Arsenal striker said, “We appreciate Petrolex for what the company did to make the event happen as the main sponsor. When we called them, they didn’t say ‘no’, they said ‘yes’ because they were convinced it is for a good cause. And from Day 1, they have been supporting us till now.”

The charity game pitched former African players tagged African Masters against their European counterparts dubbed the Premier League Masters and at the end of proceedings, the African Masters succumbed to a 9 – 4 drubbing by their opponents.

Kanu had initially revealed that proceeds from the Petrolex Kanu Cup which was in association with Masters Football will be used to help African children access life-saving heart operations through the Kanu Heart Foundation.

It will also be invested in the construction of a modern Cardiac Centre in Africa to reduce travelling overseas for treatment.

He said: “The Kanu Heart Foundation has done 542 operations since inception, and there are about 200 children on the waiting list for heart surgeries. The more we can raise funds, the more we can save more lives. Our dream is to build hospitals in Africa, starting from Nigeria. The pressure is on us to make sure that we can help more.

“The Petrolex Kanu Cup is an opportunity to bring people together to see some amazing players – and my great friends – play the beautiful game once more, whilst also raising money for a good cause.”

Sierra Leone Captain recovers from COVID-19 ahead of Eagles clash

Sierra Leone Captain recovers from COVID-19 ahead of Eagles…