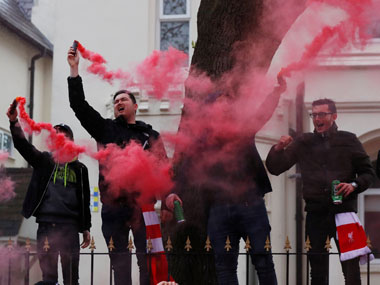 Spanish police have detained six Liverpool fans ahead of the team’s Champions League match in Barcelona on Wednesday.

In a separate incident, Spanish media showed a video of English fans pushing a tourist who was trying to take a photo into a fountain. Fans laughed as the tourist went into the water.\

Liverpool FC are reportedly working with the Merseyside Police to identify those involved.

In addition, Liverpool chief executive Peter Moore tweeted “let’s treat this beautiful city with the respect that it deserves, and act in a manner that is befitting of LFC.”

Barcelona reporters also complained the state that Liverpool supporters left the Plaça Reial in. Video of the vacated space full of litter was also shared on social media.

I’ve seen some people saying all fans leave places a mess like this, but I don’t think that makes it any better if true.

In addition we have seen with, for example, Japanese fans, that it’s totally possible for football supporters to be respectful.pic.twitter.com/G0IOSaUphe

Liverpool are set to play FC Barcelona in the UEFA Champions League today at Camp Nou.