Arsenal stars Mesut Ozil and Alexandre Lacazette were seen relaxing in the stands with a parasol during Arsenal’s clash with Southampton Thursday evening. 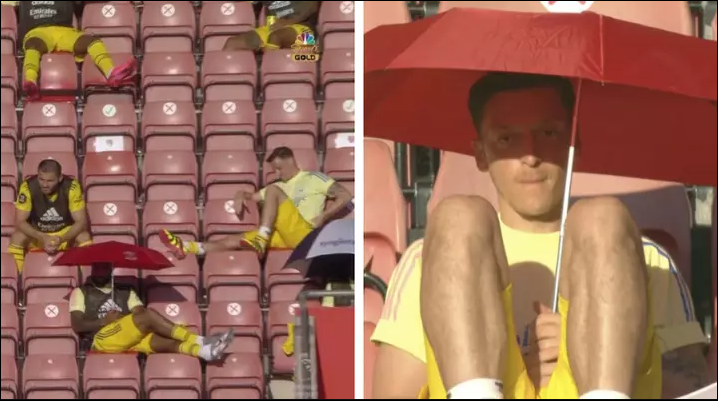 Ozil saw himself included in the squad for the first time since the league restarted but still didn’t manage to get on the pitch.

However, eagle-eyed fans spotted the German in the stands watching the game from beneath his umbrella.

Mikel Arteta opted to start Eddie Nketiah up front at St Mary’s Stadium and it meant Lacazette dropped to the bench.

However, many likely weren’t anticipating seeing the Frenchman also sat with his feet up and living his best life in the south coast sun.

Despite Ozil and Lacazette’s eye-catching displays off the pitch, Arsenal’s stars on the pitch managed to secure a vital 2-0 win.

Image: Alexandre Lacazette looking very relaxed in the stands with the other Arsenal substitutes. 😂😂 #afc pic.twitter.com/2tiZC1ghcn

Nketiah opened the scoring after capitalising on a mistake from Saints keeper Alex McCarthy.

McCarthy passed the ball straight to Nketiah in a moment of madness who strolled through and tapped the ball into an empty net.

Joe Willock netted his first ever Premier League goal late on to secure the three points.

Arsenal have climbed out of the bottom half with victory and now sit in ninth place.