Head coach of Rangers International F.C, Benedict Ugwu, has assured the club’ numerous fans that the team had enough in their ‘Arsenal’ to earn a good result in Gombe as the ‘Flying Antelopes’ begin its quest for an 8th league diadem. 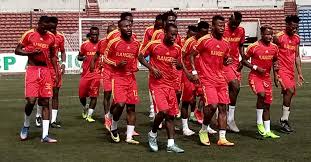 ‘Surugede’ as the former defense lynchpin is known to his fans said that the number of quality legs recruited by the club at the start of the season gives him the confidence that his wards can go the whole hug and be counted among the front runners.

Speaking in an exclusive chat as the squad hit the road for its first NPFL 2019/2020 encounter against Adamawa United at their adopted Pantami Stadium, Gombe, Coach Ugwu said, “I strongly believe that with the caliber of players we have, we would challenge effectively for all the competitions we are taking part in. looking ahead to our first league match in Gombe with Adamawa United, it won’t be an easy match but we have what it takes to come out with a great result.”

He further said, “No doubt, the fear among our supporters is understood. The fear that our continental guest may have taken its toll on the players does not hold water as we have fresh legs to perfectly defend our colors. It will be a good start for us in Gombe.”

Over half a dozen of the match day 2 squad will be looking to have their first start in the colors of the ‘Flying Antelopes’ as the coach try out new formations.

Recall that Rangers will be kick starting the new league season with an away tie to ‘New Boys’, Adamawa United in a M.D 2 fixture after having its M.D 1 tie against Sunshine Stars re-scheduled due to continental cup engagement.