Ronaldo: I warned Higuain to be calm but… 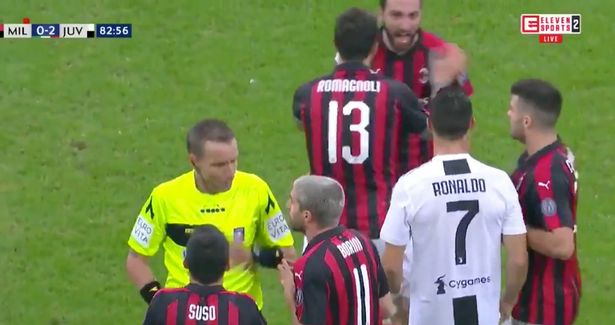 Cristiano Ronaldo says he hopes Gonzalo Higuain isn’t punished too severely after the AC Milan striker was sent off against Juventus on Sunday.

The Argentinian forward, who missed a penalty earlier in the clash, argued with the referee’s decision to award him a yellow card.

Match official Paolo Silvio Mazzoleni then responded to Higuain’s actions by showing him a red card.

At this point the striker, who is on loan from Juventus, lost all control and erupted into a fit of rage.

Ronaldo put his hand on the 30-year-old’s shoulder but this only seemed to make matters worse. Higuain waved his arms furiously, shouted at Ronaldo and pushed the five-time Ballon d’Or winner.

The AC Milan star was eventually shepherded off the pitch but not before he let his grievances known to former team-mate Giorgio Chiellini.

When asked what Ronaldo had said to Higuain, he told Sky Sport Italia: “I told him to calm down, as he risked an even heavier ban.

“He didn’t do much, he was irritable at losing the game, that’s understandable and I hope he is not punished too severely.”

“I do hope Pipita [Higuain] apologises to the referee for his attitude,” he told Sky Sport Italia. “He needs to learn to control himself more. I saw how much pressure he felt on his shoulders, taking a penalty against his old club, anyone who has played football knows that emotions can get to you in these situations.

On the victory, Ronaldo added: “I am very happy, especially for the team, because playing away to Milan is always very difficult,” CR7 told Sky Sport Italia.

“Winning 2-0 at San Siro is no mean feat. It was important to win, because Napoli beat Genoa last night and we had to keep our distance.”