Westgate sportsbook director, John Murray, believes Iron Mike Tyson could have an edge over Evander Holyfield when they both file out to fight in the proposed trilogy bout. 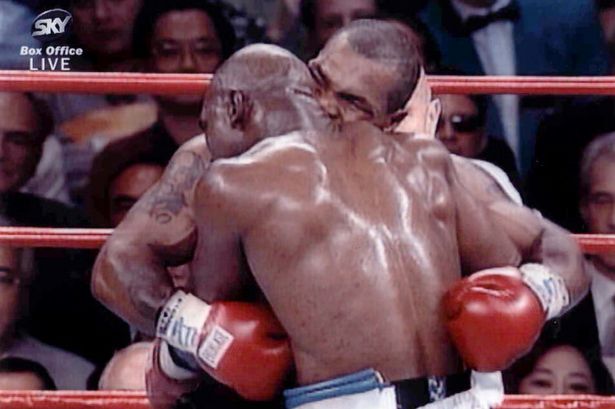 That quote from the movie “Pulp Fiction” by Marsellus Wallace might be proven wrong by former heavyweight champions Mike Tyson and Evander Holyfield.

Tyson, who turns 54 on June 30, and Holyfield, 57, each have posted impressive workout videos on social media and expressed a desire to return to the ring for an exhibition match for charity.

Will we actually see Tyson-Holyfield 3? You can bet on it at the Westgate sportsbook, which made Tyson a -300 favorite and Holyfield a +250 underdog for a potential fight.

“They both look like they’re in awesome shape,” Westgate sportsbook director John Murray said. “As silly as it sounds, people would watch that fight and people would bet on that fight. There would be a lot of interest in it because those guys are such big names.

“I don’t think it’s going to happen. But years ago I laughed at (a boxing match between) Floyd (Mayweather) and Conor (McGregor) happening and I obviously got that wrong. So never say never.”

“Some guys think Tyson should be a much bigger favorite, but I really think it should be closer to pick’em,” Murray said. “My guess is if those two actually were to fight each other, you’d see that price close lower than that.

“People would take a shot on the underdog. With two guys in their 50s, nobody knows what will happen. But people are more inclined to take (+250) than to lay -300.”

The Westgate has several other potential boxing matches on the board, including a rematch between Mayweather and McGregor, who said in January that he’d love to be in the first fight at Allegiant Stadium and was open to a bout with either Mayweather or Manny Pacquiao.

Mayweather is a -180 favorite over Pacquiao (+160) in a potential rematch of their 2015 fight that Mayweather won by unanimous decision.

“I do think when we get back to normal, one of those fights will happen,” Murray said. “Ultimately, it’s too much money for those guys to turn down. If Mayweather can make $100 million for a fight he thinks he’ll win against Conor, I don’t see why he would turn that down.”

Tyson Fury is a -275 favorite over Deontay Wilder (+235) and Canelo Alvarez is a -300 favorite over Gennady Golovkin (+250) in trilogy fights originally scheduled to take place this year. But both bouts are on hold because of the coronavirus pandemic.

Top Rank chairman Bob Arum said in early May that a fight the magnitude of Fury-Wilder would require a live audience and Murray agrees.

read also:Tyson offers fans chance to train with him ahead of comeback

“I find it hard to believe they’d do it in an empty arena. That fight is such a cash cow, they’d be better off waiting until they can do it properly,” Murray said. “(Alvarez-Golovkin) is another cash cow. I can’t believe they would do that one with no fans. That would cost them a lot of money. They could sell out T-Mobile Arena and all the Mexican boxing fans would have a big party.

“It’s not just about the gate. These fights generate a lot of money for the city.”

The Bayern Munich midfielder is expected to leave the Allianz Arena at the end of the campaign and has no shortage of admirers.

Express Sport understands United are working on a deal for Tolisso, who fancies a crack at playing in the Premier League.

Henrique has supposedly already been in contact with the player and his entourage.