When tears of joy flood for unstoppable Cristiano Ronaldo!

When tears flow freely it could be for good or bad for anguish or for joy. When tears flood from the eyes of Cristiano Ronaldo’s girlfriend Georgina Rodriguez Tuesday at the Allianz Arena in Torino, it was an overflow of joy after the former

The Portuguese star scored a stunning Hat-trick to help Juve overturn a two-goal deficit in the second leg.

Ronaldo netted a header in each half to bring the tie level on aggregate before a late penalty sparked jubilant scenes in Turin- especially among his own family. 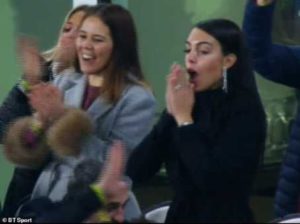 After taking a moment to catch her breath, Rodriguez couldn’t help but let her emotions get the better of her and she cried tears of joy in the stands of the Allianz Stadium, just as Ronaldo junior threw both hands in the air in celebration

The feat easily takes the mind back to the World cup in Russia where he scored a hat-trick to level up 3-3 against Spain in the Group stage. For the 32 year old it is safe to say Never say Never!

You never can say what he has up his sleeves turning the table may as well pass as his stock in trade.

Ronaldo continues to take great pleasure in rewriting the record books and the Champions League has become his own personal stage.

His performance on Tuesday explains why Juventus, who have not won the Champions League since 1996, paid Real Madrid £100million to sign Ronaldo last summer.

And even at the age of 34, the Portuguese star’s powers show little sign of diminishing as he pursues yet another Champions League medal for his collection 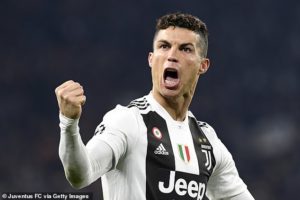 At the moment he is tied on five wins with AC Milan legends Alessandro Costacurta and Paolo Maldini, and seven other Real players who won the competition five times in a row following its inception in 1955-56.