Arsenal received a much-needed confidence boost as a Pierre-Emerick Aubameyang hat-trick set the Gunners on their way to a 6-0 Carabao Cup rout at West Brom.

Aubameyang struck twice before goals from Nicolas Pepe and Bukayo Saka ended the Cup tie as a contest. Aubameyang then completed his treble before substitute Alexandre Lacazette completed the emphatic victory at The Hawthorns to put the Gunners into the third round of the Cup in some style.

The Gunners headed into Wednesday’s tie off the back of defeats to Brentford and Chelsea in the opening two Premier League games, with morale low in Mikel Arteta’s squad.

The Arsenal manager badly needed a win, and named a strong starting lineup featuring the likes of Pierre-Emerick Aubameyang, Bukayo Saka as well as summer signings Martin Odegaard and Aaron Ramsdale – and Arteta got his reward.

After a bright start from an inexperienced West Brom side, with Ramsdale forced into a smart stop, Arsenal made the Baggies pay for slack defending 17 minutes in.

Saka’s clever feet saw him evade a number of Baggies defenders and fire in a low shot which Palmer could only push into the direction of Aubameyang, who slotted home from close range for Arsenal’s first goal of the season.

Arsenal doubled their lead moments before the break, Aubameyang again the scorer with another simple finish.

A fine through ball from Elneny was collected by Nicolas Pepe, whose shot hit the post before falling for his captain to tap in.

The tie was all-but wrapped up in first-half stoppage time: Aubameyang burst through onto a Saka pass but saw his effort saved by Palmer before his acrobatic shot fell for Pepe to slide in and make it 3-0. 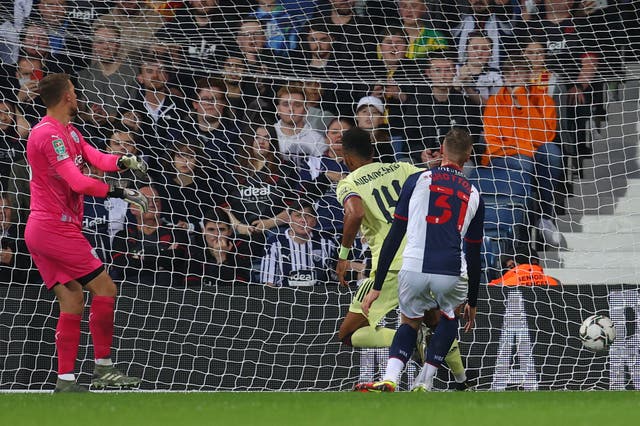 Saka added a fourth just five minutes after the restart, finishing with aplomb following a fine backheel flick from Odegaard.

Aubameyang wrapped up a hat-trick with a well-taken, curling strike to make it five before Alexandre Lacazette replaced Granit Xhaka for his first minutes of the season and got among the goals.

Pepe, who had hit the bar moments before, crossed for the Frenchman to slot home a sixth for the rampant Gunners.