Arsenal forward, Alex Iwobi could get the nod ahead of teammate, Mesut Ozil for Sunday’s Premier League against Brighton match at the Emirates. 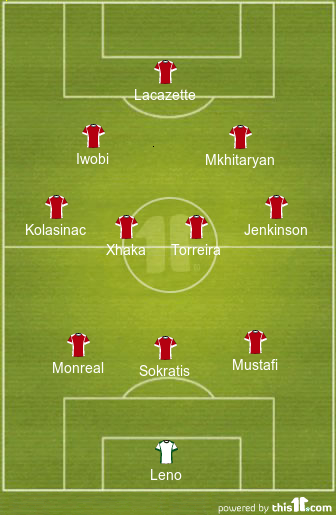 According to the4thofficial.net, Iwobi who was on the bench against Valencia will operate as the wide-attacking midfielder on the left while Henrikh Mkhitaryan will occupy the right-hand slot.

Arsenal host Seagulls on the back of three consecutive losses in the League as they eye a top four finish.

However head coach Unai Emery will be expecting a repeat of Thursday’s Europa league performance against Valencia which they won 3-1.

The Gunners were the only English side to win in Europe this midweek.

The Arsenal attack will be spearheaded by Alexandre Lacazette, who scored a brace in the win over Valencia.

Emery is likely to switch to a 3-4-2-1 formation to accommodate an extra attacking midfielder.

Eagles to spy on Madagascar, Burundi

Ronaldo to venture into coaching after retirement