Diego Maradona is set to be discharged from hospital imminently, according to his personal doctor Leopoldo Luque.

Maradona has been recovering in hospital since undergoing a “routine” operation for a subdural haematoma last week, a day after being admitted due to concerns over anaemia and dehydration.

Luque provided a further update on the 60-year-old Argentina and Napoli great, who is head coach of Gimnasia y Esgrima La Plata.

“A discharge is being considered, he really wants to leave and, although he had already expressed this desire, this is another context and another clinical picture. A patient with great consistency asks us to be discharged and we are ordering the place that will receive him, a comfortable house for his recovery.

“This is generated thanks to the support of the doctors and the hospital, but above all by the support of their environment, family and representatives. The discharge of Diego is imminent, he is not leaving today but it will be soon.”

Maradona, who won the World Cup with Argentina in 1986 and guided Napoli to two Serie A titles, has been in charge of Superliga Argentina club Gimnasia since 2019.

He appeared in a fragile state when he briefly made an appearance as his Gimnasia side played a match on the evening of his birthday last month.

Gimnasia were in action on Sunday for the first time since their head coach was hospitalised, drawing 2-2 with Velez Sarsfield in Argentina’s top tier.

Their players held a banner reading “we are with you” ahead of the game, and assistant boss Sebastian Mendez hopes his side did Maradona proud with their display.

“It has been a complicated week,” he said. “Diego is still hospitalised and we are all aware of that. 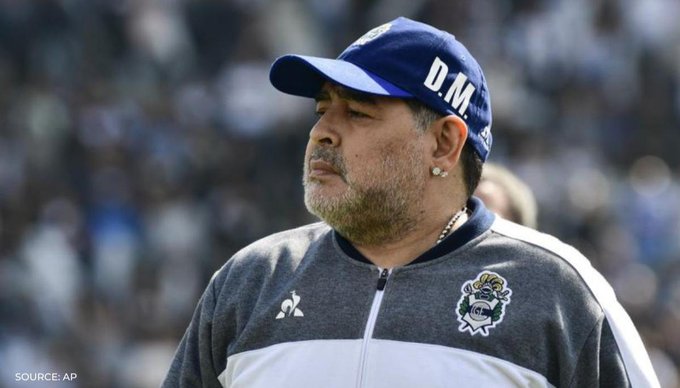 “We have built a very strong group and we are a family. When one falls, another picks him up. There is always a word of encouragement and that makes the group healthy. It also results in a team that is hard to beat on the pitch. It was a difficult week and we managed to play well.

“The latest news I have from Diego is that he is very well, luckily, and thank God because it is what we all hope. He is in a good mood and passes these days in the best possible way.”