Super Eagles duo John Obi Mikel and Oghenekaro Etebo enjoyed full 90 minutes action as Middlesbrough hosted Stoke City in the English Championship Friday. Although it was Boro what had the last laugh following their lone goal victory, Etebor and his teammates gave a good account of themselves and even dominated proceedings but the goals refused to come.

Boro had shot into the lead as early as the 2nd minute of the match thanks to Congo DR import Britt Assombalonga. Boro who had 42% possession in the match, managed to checkmate their visiting opponents who had greater possession control from converting any of the chances created.

The victory is considered a big achievement in the Boro’s camp as it is their first in the last four championship games. 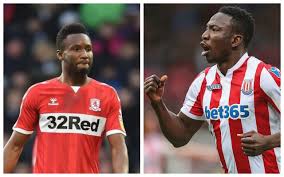 The coach Tony Pulis tutored side prior to Friday’s victory had lost three games to Norwich City, Bristol City and Swansea City respectively. Stoke City on their part recorded their last victory against Blackburn Rovers weeks before a string of draw games against shepherd Wednesday and Reading.

Iwobi: I want to win Nations Cup like Okocha