Tottenham manager Jose Mourinho returned to Manchester on Tuesday night – and was greeted by buoyant fans. 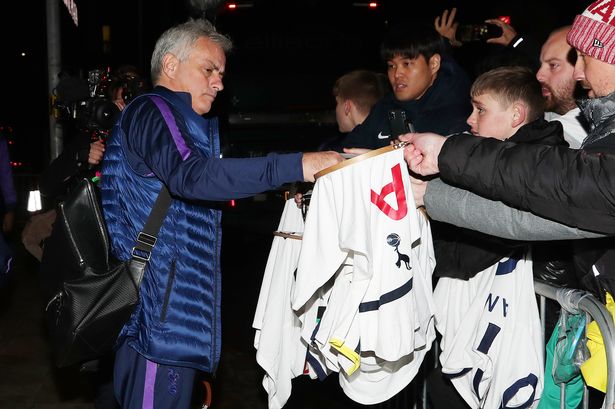 Spurs meet Manchester United on Wednesday night looking for a fourth straight win under the Portuguese.

It is the manager’s first return to the touchline at Old Trafford since his sacking by the Red Devils last December.

Ahead of the crunch clash, the manager and his team checked in to their hotel on Tuesday and were mobbed by Spurs supporters, who waited in the cold Manchester conditions to greet their heroes.

Mourinho, dressed in his familiar Spurs training gear, appeared in high spirits and was more than happy to sign autographs for fans.

It was revealed on Tuesday how Mourinho and his Spurs side rejected the chance to stay at the Lowry Hotel and will instead be located at the £70-a-night Crowne Plaza.

Mourinho will aim to continue his 100 per cent start as Spurs manager when he returns to Old Trafford for the first time as a coach since being sacked by United.

The Portuguese won the Europa League and League Cup in two full seasons at United but was sacked midway through the last campaign with the club sixth in the Premier League.

“Going back to Old Trafford is to go back to a place where I was happy. I can say that. I have a great relationship with Manchester United supporters.