Goals from DeAndre Yedlin and Ciaran Clarke helped Newcastle United recover from a goal down to beat Bournemouth 2-1 at St James’s Park on Saturday. 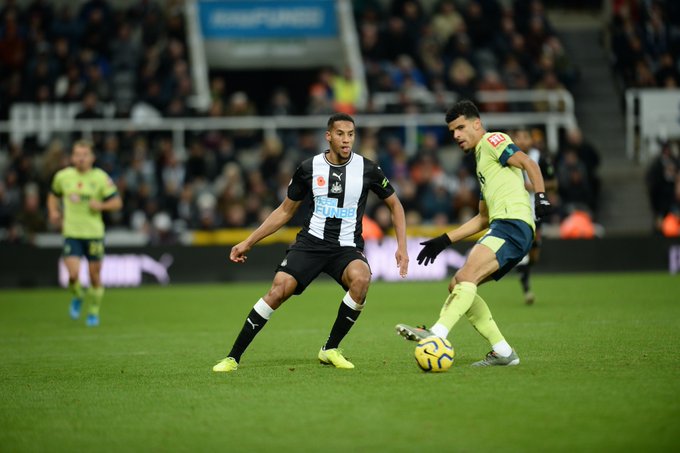 Bournemouth went ahead in the 14th minute with a brilliantly-worked corner as Harry Wilson made a looping run from the back post before hammering an unstoppable shot low to the keeper’s right.

Newcastle lost their captain and defensive lynchpin Jamaal Lascelles to injury shortly afterwards, but the home side began to create decent chances as they battled their way back into the game.

Yet to score for Newcastle, winger Allan Saint-Maximin hit the crossbar before his side levelled when his next shot was deflected.

Yedlin, who came steaming in at the far post, headed home just before the break, but though the crowd went wild, his celebrations were muted.

“I was a bit nervous when they were checking VAR.

“It is hard to celebrate and then if you get caught offside you look a bit stupid, but thankfully in the end it was given as a goal,” he said.

Better known for his heading prowess, Irish international Ciaran Clarke let his feet do the talking seven minutes into the second half.

He scuffed the ball home for his second goal in two games to put his side ahead.

Newcastle weathered a late storm to hang on for a win that lifts them to 11th place in the table on 15 points after 12 games, while Bournemouth are a point ahead of them in 12th position.
“We had the initiative of the game but gave it away. I felt we should have kept the ball better, and we need to learn from it,” Bournemouth manager Eddie Howe told the BBC.

“We are looking for consistency, backing up a great win with another one and today we missed an opportunity. This result will really hurt for the next two weeks,” he added. (Reuters/NAN)