Southgate confirms he will stay as England boss after Euros heartbreak

Gareth Southgate says he will stay in his role as England manager for the 2022 World Cup but insists he needs time to reflect before committing to a new contract.

Southgate and his players suffered heartbreak at Wembley as they were beaten by Italy on penalties in the final of Euro 2020 on Sunday.

The FA want to hand the 50-year-old a new deal after leading the Three Lions to their first major final in 55 years following a World Cup semi-final appearance in 2018.

But speaking after England’s defeat, Southgate insisted now is not the time to be thinking about his future beyond next year’s tournament in Qatar.

‘I don’t think now is an appropriate time to think about anything,’ he said.

‘We have got to qualify for Qatar but I need some time to go away and watch the game and reflect on the whole tournament, I need a rest.

‘It is an amazing experience but to lead your country in these tournaments takes it toll and I need a break now.

‘I said at the time it is great to have that internal support, you greatly value that as a manager.

‘I want to take the team to Qatar, I feel we have made progress over the four years, we have had a fourth, a third and a second-placed finish and that is as good as anyone.’

Southgate said that ensuring his players were supported after the penalty heartbreak was ‘top of his thinking’ in the hours after the final and also insisted he had been the one to decide which players would step up. 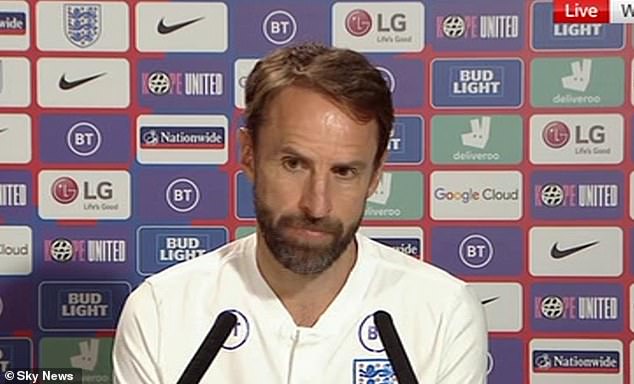 ‘We’ve got to make sure that we’re there, and aligned with their club, and making sure that we look after those boys, absolutely.

‘It’s my decision who takes the penalties, it’s not more experienced players backing out, they didn’t have the chance. It was my decision.

‘I’ve still got huge belief in them. Those boys have done a brilliant job. We heal together as a team now. We’re here for them, and I know 99 per cent of the public will be as well.’